By RogersGichana (self media writer) | 1 month ago

As the 2022 presidential campaigns take shape, a renowned pastor from Kisii County has predicted who will succeed President Uhuru Kenyatta.

Pastor Peter Morwabe of Gospel Embassy Church in Kisii town was televising his sermon on a local Television channel when he said Dr. William Ruto will carry the day come August next year.

"Because am in Kenya the election is in August next year 2022, the office of the president is one, they have never been two and the one who will take it over is one from the same office. Remember Kenya is not without God, there is God who wants Kenya," Said Morwabe as congregants cheered up.

The pastor says he has already seen Kisii County making the same mistake Nyamira made in 2013 of electing a wrong Governor. He said God has already told him who will be a Governor in the two counties. Though he did not mention their names.

"I have seen Kisii County making the same mistake Nyamira made in 2013 of electing the late Nyagarama. God has already told me who will be a Governor in Nyamira and have personably made a Phone call to him. If you are contesting in Nyamira and have not called you know you wont win," He said

In February last year from his file sermons seen by this writer, the pastor strongly canceled BBI during a morning devotion service at his church. According to him, the court's decision to throw away the report was Godly and had seen it in a vision. 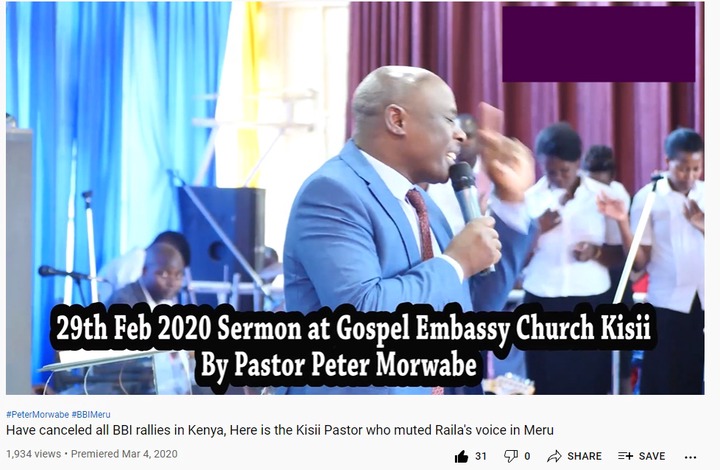 In the sermon, he is further recorded saying that God will mute the voices of those who will continue with BBI. The same day later in the evening after his remarks, Raila Odinga lost his voice while addressing a BBI Rally in Meru.