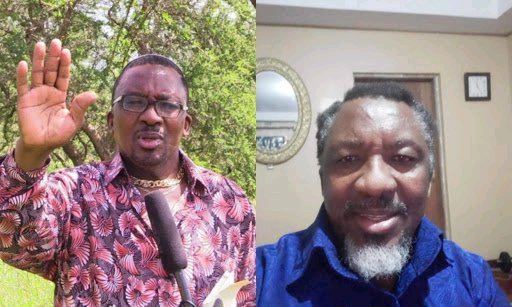 Ng'ang'a stated in an interview with Pacific Waves while in the United States that the God he knows is distinct from other people's Gods.

"I've done a lot of things that some of you are unaware of; I've smoked pot, I've raped, I've been arrested, and I've stolen from people, but now I'm serving God," he explained.

The man of God continued by stating that the majority of Christians have spirits that continue to plague them, yet they desire to hold on to them.

"They don't want me to bring up the spirits that are bothering them; all they want are pastors who solicit money but do not call people to repentance."

He continued by stating that he does not agree with certain things that people desire.

A cow, a goat, and a sheep are present. These are all animals, but they are all unique. Similarly, we each have unique ministry callings. "

When asked how he feels about being referred to as a controversial pastor, Ng'ang'a stated that not every insect that flies is a bee.

"We have a fly, an insect that is not venomous. I've served in the ministry; I was saved in jail following a fight with my colleagues. The police officer duped me into admitting I had fought, and thus began my path to jail, "he continued, adding that if anyone wishes to assist someone, they should do it when they regain their freedom.

Once inside cells, they become spoiled as a result of the harsh conditions. You are cynical, "he stated.

Even before I entered jail, I had a vision of helping God. My father died, and I rose to prominence. Even while incarcerated, I had that call. There, I used to sing a lot.

Following his release from prison, he stated that he lacked mentors since several pastors were self-centered and afraid that he would take over their ministries.

I dislike pastors who beg all the time, and because I had a kiosk, he would come and borrow ten bobs from me; I wanted to be wealthy and build a church, not a beggar.I began singing at the railroad and attracting people to the church; the pastor expressed concern that I might overrun his congregation, and they pursued me. "

Concerning his infamous "matuta" and "kiosks" outbursts, which gained widespread attention on social media, Ng'ang'a remained unapologetic, stating that it was true that some of his parishioners rebelled after joining his church as destitute and became rich.

"I had provided the pastor a place to stay at my house, and when his wife arrived with unkempt hair, I had to take her to the salon to make her seem presentable."