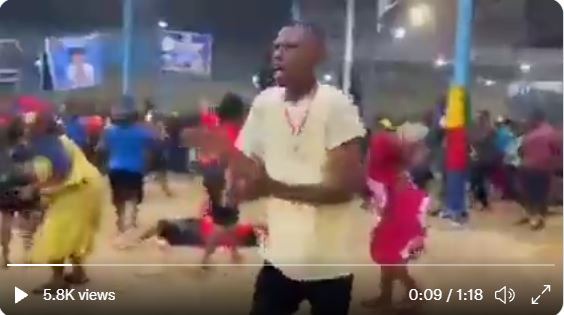 A controversial video of church members in Nigeria has emerged. From the video, it was apparent that the congregants could be seen under the influence of the powerful Holy Spirit.

Almost everyone could be seen wobbly and falling down as a preacher continued with his sermon in the background.

While sharing the video on his official Twitter handle, Lord Abraham Mutai commented on the mass hysteria that was being experienced by the church members. He also blamed their conduct on poverty.

He cited that he had never seen any influential or rich members doing that act in a place of worship.

“A Church in Nigeria released a video showing the point at which Holy Spirit descended on the congregants. Conveniently, the mass hysteria induced by the holy spirit skipped the cameramen. I have never seen rich people do this in a church. Only poor Africans. Poverty is the ENEMY.” He tweeted.

While reacting to the viral video, many netizens expressed their different opinions on the matter. Some lauded members of the congregation for the staunch belief in the healing powers of Holy Spirit while some held divergent views.

“Religion in its entirety has been compromised, whether Muslim, Christian, Jewish etc. I blame individuals who don't read and integrate the so-called holy books for themselves rather dependent on one individual synthesis. God's intentions are pure.” Cyprian commented.

“Woow, this is what we call Holy Ghost fire!”

@Mjay: The whole incident looks scripted. Has anyone noticed that they were falling in a particular manner and predefined time?

What is your take on this issue? Meanwhile you can watch the video here.

Reactions As Popular Prophetess Stuns Dressed In A School Uniform

Other Uses of Sugar You Need To Know