Is this the most Scary chapter in the Bible?

By RIVALDOh (self media writer) | 5 months ago 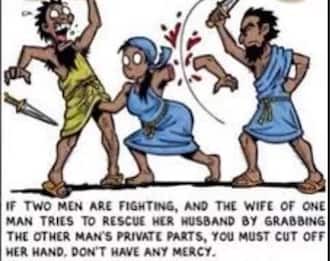 As I was reading my bible, I came across Deuteronomy chapter 25. I was stunned and decided to share. Have a look at the following extracts.

This verse gives judges authority to whip criminals. The number of strokes should however not exceed 40.

"If the guilty one is sentenced to be beaten, the judge is to make him lie face downward and have him whipped. The number of lashes will depend on the crime he has committed."

"Suppose two Israelites go to court to settle a dispute, and one is declared innocent and the other guilty. He may be given as many as forty lashes, but no more; more than that would humiliate him publicly.

The verse suggests that one can face harsh punishment should they fail to inherit their deceased brother's wife.

"If two brothers live on the same property and one of them dies, leaving no son, then his widow is not to be married to someone outside the family; it is the duty of the dead man's brother to marry her. The first son that they have will be considered the son of the dead man, so that his family line will continue in Israel. But if the dead man's brother does not want to marry her, she is to go before the town leaders and say, 'My husband's brother will not do his duty; he refuses to give his brother a descendant among the people of Israel.' Then the town leaders are to summon him and speak to him. If he still refuses to marry her, his brother's widow is to go up to him in the presence of the town leaders, take off one of his sandals, spit in his face, and say, 'This is what happens to the man who refuses to give his brother a descendant.' His family will be known in Israel as 'the family of the man who had his sandal pulled off.'

"If two men are having a fight and the wife of one tries to help her husband by grabbing hold of the other man's genitals, show her no mercy; cut off her hand.

Content created and supplied by: RIVALDOh (via Opera News )

The 5 Most Common Cancer Types You Should Be Aware Of