Popular Nairobi Church That Was Built by Freemasons, See What Was Buried at Its Foundation

By Punchnews.com (self media writer) | 1 month ago

A member of the freemasons is a member of a worldwide fraternal organization.

The fraternal organizations that make up freemasonry, also known as masonsry, have their roots in the local stonemason fraternities that, beginning at the end of the 14th century, regulated the credentials of stonemasons and their interactions with clients and authorities.

Numerous conspiracy theories have been made about freemasonry over the years. 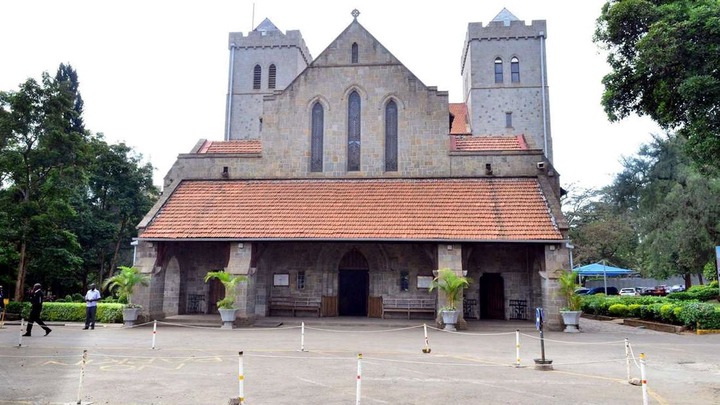 The All Saints Cathedral along Kenyatta Avenue was designed by British architect, Temple Moore who was a Freemason in Kenya.

Governor of colonial Kenya at the time, Sir Henry Conway Belfield, laid the cornerstone for the church's construction in 1917.

The masons, in accordance with their customs, buried a copy of that day's East African Standard Newspaper and rupee coins bearing the year in the foundation stone of the All Saints Cathedral. The church is strategically located in the center of Kenya's capital city, Nairobi, along the Kenyatta Avenue just outside the Nairobi Central Business District! 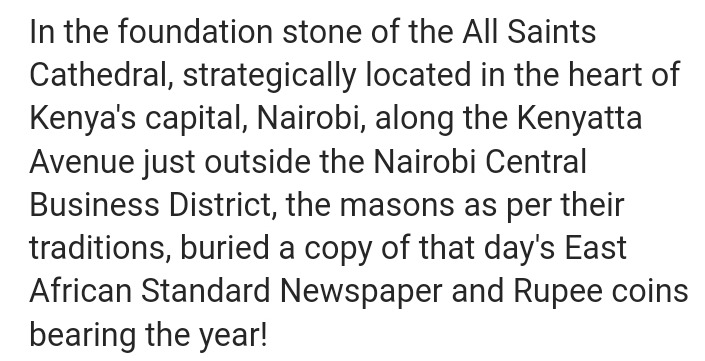 The stained glass windows in the cathedral were created by AJ Davis, a well known stained glass designer from Britain, and were finished in four parts between 1917 and 1952.

With castellated towers at either end of the transept, one of which houses the belltower and the other the organ tower, the structure has an English Gothic design.

Its roof is supported by pointed arches and timber trusses, and its walls are made of smooth dressed stone with recessed white mortar seams.

The government has safeguarded the Anglican Church of Kenya's cathedral as a gazetted national landmark.

Since the Governor and other senior officials attended mass there, ACK was seen as the official church of the colonial power and held a special position.

The official residence of the Head of the ACK was constructed next to State House Nairobi as a sign of the church's influence within the government.

The State of Emergency's Governor of Kenya, Sir Evelyn Baring, and his wife decided to take Holy Communion at State House rather than having to travel the short distance to All Saints Cathedral.

Masons also created a large number of structures that house public institutions and offices, such the Nairobi and Jamhuri Schools.

When the White House Lodge, which was also constructed by masons, caught fire in 1905, a replacement was erected right there, where the Central Bank of Kenya stands today.

Unexpectedly, during the 15 years of his administration, Kenya's first president, Mzee Jomo Kenyatta, did not attend church services.