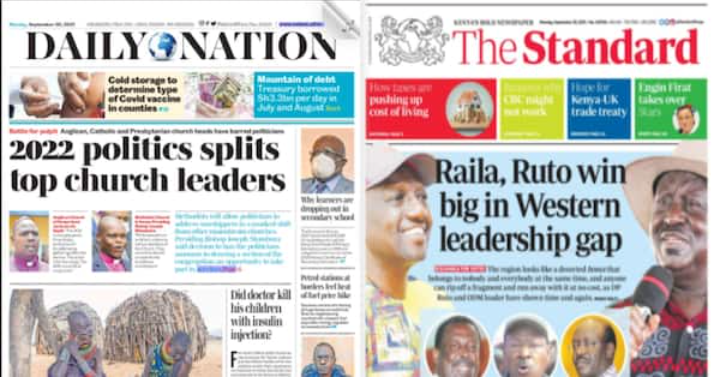 The country’s top newspapers on Monday, September 20 reported on the push to have the constitution changed in bid to create two positions in the office of the Deputy President.

The national dailies further reported on the division witnessed among the country’s top church leaders concerning the new order that bans politician from churches.

The new order stopping politicians from politicking in churches has caused a division between the country’s top church leaders.

A week ago, the Anglican Church of Kenya (ACK) seconded the Catholic leaders in kicking out politicians selling there ambitions from the pulpit.

According to ACK archbishop Ole Sapit, all political leaders who attend church services would not be allowed to address the congregation during the main service but after and not from the pulpit.

The archbishop went ahead noting that the pulpit will only be preserved for the clergy.

His sentiments however did not come into terms with the Methodist Church in Kenya who argued that politicians should be treated as church members without discrimination.

The Methodist church presiding Bishop Joseph Ntombura said that they not ban politicians from their church but welcome them with warm hands and allow them address the congregation from the pulpit.

“Politicians are our brothers and sisters as well as mebers of the church. They cannot be denied an opportunity to address worshippers,” said Ntombura.

This daily reported on the fresh plan plotted by some members of the National Assembly to have changes in the constitution that would create two positions in the office of deputy president.

However, many have been left wondering who, between the two would be the President’s substantial principal assistant and who would be taking charge when the President is away.

Those pushing for the changes are members sitting in the National Assembly’s Constitutional Implementation Oversight Committee (CIOC).

“We have finalised the Bill on the expansion of the Executive but wfirste must address some grey area sroubnd the creation of the two positions of deputy president. There are questions on which one of them will assume the role of the HJead of DState in absence of the president. The Bill needs to put clarity o the matter,” said Ndaragwa MP Jeremiah Kioni, a member of the committee.

The members now want a referendum to have the changes adopted and which they say should be included in the 2022 general elections.

According to The Standard, the country’s presidential candidates are scrambling to win over The Western Kenya region as the next year’s election nears.

The daily reported that the region is not committed to an individual hence giving the presidential hopeful’s a chance to try their luck in marshalling support.

A week ago, Deputy President William Ruto was in the region campaigning for his presidential bid.

The former premier Raila Odinga was also in the region where he gave out several reasons as to why the region people should support him.

The two had massive following in their visits proving that they would enjoy good fruits from the region.