What does the Bible say about John the baptist?

By Selftheagent (self media writer) | 7 months ago 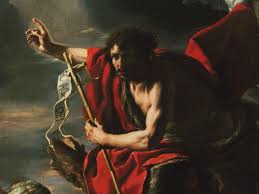 During the time of Jesus, a man named John the Baptist lived in the desert territory near the Jordan River in Palestine. He was known as John "The Baptist" because the Bible says he baptized a large number of people.

He is well-known in Bible history as a man who publicly predicted the Messiah's imminent arrival. Jesus of Nazareth, John's cousin, was revealed to be the Messiah.

John was born in a special way.

The birth of John is a fascinating story. In Luke chapter 1, the Bible writer Luke, a medical doctor who undertook extensive research, wrote about the birth of John the Baptist.

John's father, Zechariah, was a Jewish priest descended from Aaron's line. Elizabeth, his wife, came from a similar family. “They had no children since Elizabeth couldn't have any, and she and Zechariah were both quite old,” according to the Bible (Good News Translation).

An angel appeared to Zechariah one day and told him that his wife was expecting a child, and that they should name the child John. Because of their age, Zechariah doubted this could happen. “OK, since you don't believe,” the angel said. You won't be able to communicate until the baby is born.”

Zechariah was unable to talk for nine months. He utilized sign language, according to the Bible: “He made signs to them with his hands” (Luke 1:22). When it came time to name the infant, Zechariah scribbled “His name is John” on a pad. Zechariah was able to speak again after that.

Although there were no cameras in those days, the Bible describes John the Baptist's look in an unusual way. “Now John himself was dressed in camel hair and wore a leather belt around his waist, and his diet consisted of locusts and wild honey” (Matthew 3:4). As a result, John dressed up as Elijah.

What did John eat?

Because locusts and honey were plentiful in the desert region where John preached, John ate them. Some individuals believe that “locusts and wild honey” refers to the accessible local cuisine. Beehives in trees can be seen all over the world. Even now, some residents from John's time make a living by harvesting wild honey.

Content created and supplied by: Selftheagent (via Opera News )