The Holy Sunday marking the start of a Holy week to all Christians.

By Omari (self media writer) | 4 months ago

Christians at that Catholic diocese of Homabay we happily enjoying their Palm Sunday. They we moving happily showing their happiness by carrying the palm leaves and moving around from Homabay Azimio ground near the industrial area.

The residents of Homabay town were tuned to the celebration which made them to join the congregation and move as a group.

After a long way move they arrived happily and peacefully at the church ground (cathedral), where they shared a word from the Holy bible.

What is all about palm Sunday? 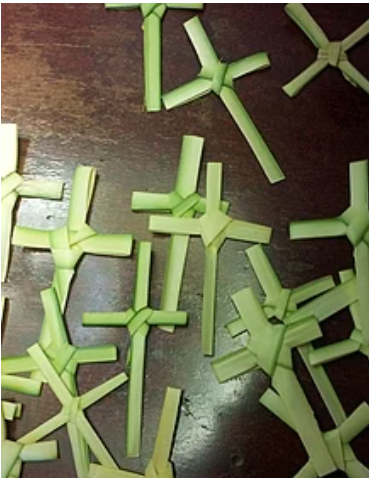 Palm Sunday is a Christian moveable feast that falls on the Sunday before Easter. The feast commemorates Jesus' triumphal entry into Jerusalem, an event mentioned in each of the four canonical Gospels.[3] Palm Sunday marks the first day of Holy Week. For adherents of Nicene Christianity, it is the last week of the Christian solemn season of Lent that precedes the arrival of Eastertide.

In most liturgical churches, Palm Sunday is celebrated by the blessing and distribution of palm branches (or the branches of other native trees), representing the palm branches which the crowd scattered in front of Christ as he rode into Jerusalem. The difficulty of procuring palms in unfavorable climates led to their substitution with branches of native trees, including box, olive, willow, and yew. The Sunday was often named after these substitute trees, as in Yew Sunday, or by the general term Branch Sunday. In Syriac Christianity it is often called as Oshana Sunday or Hosanna Sunday based on the biblical words uttered by the crowd while Jesus entered Jerusalem.

Many churches of mainstream Christian denominations, including the Orthodox, Catholic, Lutheran, Methodist, Anglican, Moravian and Reformed traditions, distribute palm branches to their congregations during their Palm Sunday liturgies. Christians take these palms, which are often blessed by clergy, to their homes where they hang them alongside Christian art (especially crosses and crucifixes) or keep them in their Bibles or devotionals.[6] In the period preceding the next year's Lent, known as Shrovetide, churches often place a basket in their narthex to collect these palms, which are then ritually burned on Shrove Tuesday to make the ashes to be used on the following day, Ash Wednesday, which is the first day of Lent.

Content created and supplied by: Omari (via Opera News )

Miguna Reveals When he Will Return Back to Kenya

Miguna Is Ready To Come Back To Kenya.

DP Ruto Exposes Details of Morning Phone Call With Raila, Reveals What he Told him on Handshake Call

Just In: President-Elect Ruto Reveals Details of a Phone Call To Baba and What Was Discussed

Four Commissioners Split Over Transparency of Results Say It Is Opaque