7 Reasons Why Wrong Is Always Wrong

Some people try to rationalize why it is acceptable to do the wrong thing. However, wrong is always wrong no matter how hard someone tries to excuse it as being the right thing to do. There is never a right time to do something wrong. 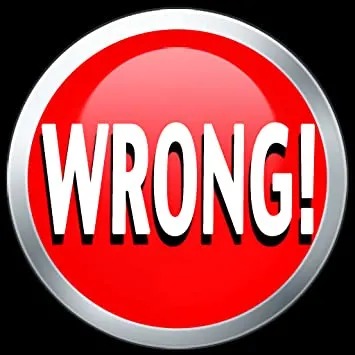 Wrong is always wrong even when people excuse it by saying it is for a good cause. A so-called honorable purpose does not justify doing a dishonorable deed. All sin is a transgression of the law, according to First John 3:4, 5:17, and 2 John 9.

There is no such thing as an honorable sin that is done before a Holy God.

2. Even If Others Are Doing It

It is not unusual to hear people say, "Everybody else is doing it." Wrong is still wrong even if others are doing it. We should never follow others into doing something wrong. Jesus Christ is our example and should be the measure of our righteousness.

"Thou shalt not follow a multitude to do evil" (Exodus 23:2)

"Abstain from all appearance of evil" (1 Thessalonians 5:22).

3. Even If It Doesn't Bother the Conscience

Wrong is wrong even if it doesn't bother you to do wrong. Some people can do wrong and still can sleep at night. That doesn't mean the act wasn't wrong. Even If Wrong Is Accepted

Even when others accept your wrongdoings, God doesn't. People might readily accept your wrong because they themselves are doing wrong. Therefore, they cannot condemn you for doing what they are doing. Even though the sin might not be the same one, sin is still sin, and all still is wrong.

5. Even If You Don't Get Caught

"The eyes of the Lord are in every place behold the evil and the good" (Proverbs 15:3).

God sees all and God knows all.

6.Never a Right Way to Do Something Wrong

7. Even If You Apologize For It

Wrong is always wrong even if you apologize for it. Some people do wrong and apologize to the people affected by the action. An apology is commendable, but if the wrong action continues, the person isn't really sorry for his wrongdoing.

Apologies do not absorb the person of sin. If the person is sincere, he will turn away from doing wrong with evidence of doing the right things.

If you have been doing something wrong, repent, and ask God to forgive you. If there is any retribution that can be offered, do so.

Begin a clean slate by doing what is right as much as possible. Refrain from thinking wrong can be right because there is never a right time to do something wrong.

Remember, there is always right to do a right thing and always wrong to do a wrong thing.