By Simplylenah_ (self meida writer) | 7 days 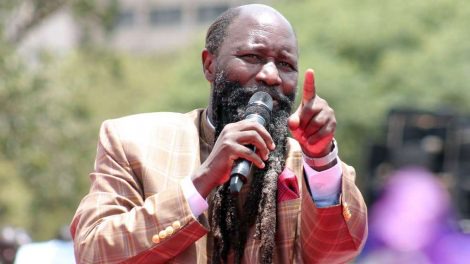 Prophet Owuor is a self - proclaimed Kenyan preacher who allegedly claims that he was anointed by God. He is one of richest pastors in Kenya at the moment.

Prophet Owuor was born in the year 1966 in Goma village, Usenge in Bondo District. He is the one who founded the Ministry of Repentance and Holiness. Owuor also considers himself to be a prophet and scientist as well.

He is the second born in a family of three boys and six girls. His father who was called Helekia Owuor was a civil servant who worked with the East African Community Prison Service and his mother ,the late Margaret Achieng’ Owuor who was a Christian, a devoted mother and a peasant farmer.

For his university education, Prophet Owuor joined Makerere University still in Uganda for a Bachelor of Science degree which was his first degree. However, he later moved to the University of Nairobi and did his second degree.

Dr. Owuor then enrolled to Ben Gurion University of the Negev in Israel for his Masters programme.

Later, he pursued a PhD in Molecular Genetics at University of Haifa still in Israel. Interestingly, he also holds a degree from the University of Giessen’s Institute for Genetics located in Germany.

Prophet Owuor has made several prophecies on certain events around the world that have made some to believe that he is a true prophet.

One of this prophecies was proclaiming that a big earthquake would hit the island of Hispaniola that is between Haiti and the Dominican Republic and the only way this earthquake would not have happened was if the people repented. 2 months later after his prophecy in Jan 2010, a massive earthquake hit the Haitian capital city killing approximately 220,000 people.

He also made another prophecy whereby he claimed to have received a warning vision for Chile of a massive tsunami hitting the land. A year later, an earthquake struck killing over five hundred people

Most of his prophecies are utter lies such as claiming to have healed people of diseases such as HIV/Aids.

He has been accused severally of being in the Illuminati and also being a devil worshipper.

Some things about him are that:-

> He always dresses in white clothing from head to toe

> He apparently doesn’t accept offering and donations from his congregation and does everything for free which is an absolute lie.

> He claims that his prophecies have no exact time of occurrence and that he mostly receives them as visions.

> He uses the internet as his main platform

> He has put in place a strict dress code for his congregation.