By TheAfricanTimes (self media writer) | 22 days ago

Legio Maria is a religious movement among the luo community in Kenya which emerged as an extension of an interpretation of the three secrets of Fatima to a new labeit African context. Its members are required to remove the lower six teeth so as to get initiated into the religion.

Which they believe is a sign they must bear upon their entry in heaven so that God recognizes them as his servants. This law is non-negotiable even to the children.

But here is where it gets interesting: their first Jesus was an Indian man named Melchizedek. After his death, he was resurrected in Israel as Jesus. After Jesus died, he resurrected in Africa as Melkio Simeo alias Ondeto who had his mother Mary: the spiritual founder of Legio Maria.

This African Jesus ordered people to extract their six lower teeth so he would recognize them if they reached heaven. Failure to which, they will not see the Kingdom of God. The same way the male jews were ordered to be circumcised during the time of Jesus.

Where did Melkio Simeo AKA the black Jesus come from? Legio Maria started in 1961 boosting of 3.5- 4 million devotees spread across East Africa. It is said that one day as young Simeo Melkio was riding a bicycle from Udenda temple; he fell on a stone.

[Photo courtesy: The stone on which Simeo fell on.]

His blood, instead of spilling on the stone, waited until he reached the temple. And as everyone witnessed, his blood started oozing and overflowed like a flood. Then a voice was heard saying, " I came to make the world new". Hence a wall was built at the exact spot Simeo's blood oozed and the place was named Gethsemane.

[Photo courtesy: Stone built around the spot his blood spilled.]

The place is always closed and merely opened on the first day of the 7th month for everyone to see. As it is considered as a holy ground where God gave them his commandments

Back to the place where young Simeo fell with his bicycle, the stone is naturally curved with a cross. And it is where his devotees conduct their prayers with burning candles. It is said that a great miracle was once witnessed after people came to construct a road. Upon reaching on the stone, they covered it in the ground. From that day, their road machines allegedly failed until they put the stone back. And the machines continued functioning as usual. 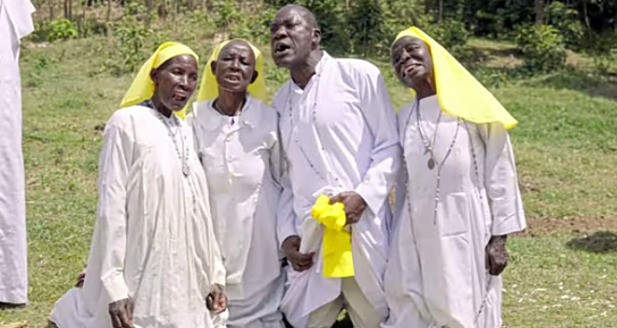 Simeo Melkio, their messiah was said to have 'died' for three days and came back to life on the third day. But he later died in 1991 where he was buried at God Calvary in Migori. Only that this time, he never resurrected.

Content created and supplied by: TheAfricanTimes (via Opera News )