By WawireCornel (self meida writer) | 25 days 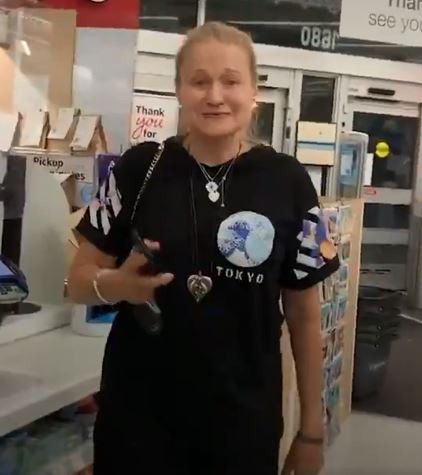 A viral video doing rounds on social media has made the day of many people after a white woman found herself in hot soup for racially abusing a Muslim couple.

According to the video shared by Ahmed Mohamed on twitter, a white woman started abusing a Muslim couple after she was asked to wear a mask in one of the grocery stores in the United States.

Feeling targeted by the store attendant, the woman turned to the Muslim lady, who was in company of her husband and asked if she had a mask under her hijab.

After being told to mind her business, she started throwing all sorts of insults towards the couple who were at this time recording her.

Seeing that she was being unruly, the store attendants asked her to get out. Instead of getting out, she called the police who arrived after minutes.

Upon their arrival, the police listened and even watched to the clip being recorded by the Muslim couple, and later made their judgement.

It shocked the white woman when the police decided to handcuff her after making their judgement concerning the situation.

Surprisingly, the racist white woman changed her tune claiming that she did not abuse the Muslim couple. She even pointed out that she has a Muslim friend thus could not have done that.

Unfortunately, all the evidence the police needed against her had been recorded thus nothing she said mattered at all.