The meaning of darkness during the day Jesus was crucified

By Phycologicalcounselormarsh (self meida writer) | 15 days 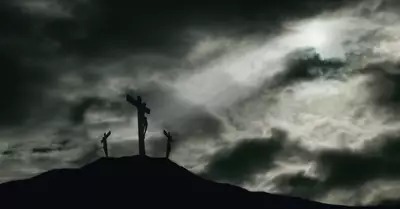 A man is arrested early in the morning, within a few hours he's tried and the case determined, though innocent, he is condemned to die by hanging like a capital offender. At around 9AM he is hanged, everyone witnesses and confirms that he's the one. His enemies and the ones who wanted him dead rejoice and his friends and relatives mourn him having nothing much to do, his closest friends and disciples despite some of them betraying and denying him, they also desert him and he's only left with his mother and some few other people some who were sympathizing and others mocking him, others were the two criminals by his sides and the soldiers.

He gasps for air as he tries to make short statements because the ribcage and the diaphragm was under pressure for the whole body had hanged by the nailed hands, he thirsts for loss of blood from the wounds his enemies had inflicted, they close his file from the living and divide his clothes, the local and international media writes breaking news headlines and really try to carefully make the headlines look real breaking. "SELF-PROCLAIMED MESSIAH IS DEAD" "THE MAN FROM NAZARETH WHO CLAIMED TO BE THE 'SON OF GOD' HANGED AMONG TWO NOTORIOUS CRIMINALS"

At around 12 Noon when everyone was busy with their businesses, something unusual happens, the land is covered by the dark, in the first few minutes everyone thinks it's an ordinary solar eclipse or maybe a passing cloud but minutes turns into hours. The creator and the only one through all things were made, had been hanged on a tree like a criminal. Midday had turned into midnight!

Little did the sons of men known that the Son of God was among them; nor that he was working out human redemption. The grandest hour in all history seemed likely to pass by unheeded, when, suddenly, night hurried from her chambers and usurped the day. Everyone asked his fellow, “What does this darkness mean?” Business stood still: the plough stopped in mid-furrow, and the axe paused uplifted. It was the middle of the day, when men are busiest; but they made a general pause.

Not only on Calvary, but on every hill, and in every valley, the gloom settled down. There was a halt in the caravan of life. No one could move unless they groped their way like the blind. The master of the house called for a light at noon, and his servant tremblingly obeyed the unusual summons. Other lights were twinkling, and Jerusalem was as a city by night, only men were not in their beds. How startled were mankind! Around the great death-bed an appropriate quiet was secured.

I do not doubt that a shuddering awe came over the masses of the people, and the thoughtful foresaw terrible things. Those who had stood around the cross, and had dared to insult the majesty of Jesus, were paralysed with fear. They ceased their ribaldry, and with it their cruel exaltation. They were cowed though not convinced, even the basest of them; while the better kind “struck their breasts and returned.” As many as could do so, no doubt, stumbled to their rooms, and endeavoured to hide themselves, for fear of awful judgments which they feared were near. I do not wonder that there should be traditions of strange things that were said during the hush of that darkness.

Those whispers of the past may or may not be true: they have been the subject of learned controversy, but the labour of the dispute was energy ill spent. Yet we could not have wondered if one did say as he is reported to have done, “God is suffering, or the world is perishing.” There must have been confusion in the dark, regrets and wonder what would happen next.

Why had darkness to cover the earth when one who was holy and he himself is light by nature, why were things getting from bad to worse that apart from being beaten, accused falsely and hanged on a tree, darkness covers a noon sunlight for three good hours, what could have been the significance of the event? I am not a theologian neither have I received revelation from God about the same, but with my little biblical knowledge, I am convinced that this was not just a coincidence or maybe by chance.

In the Old Testament, darkness is frequently a sign of judgment (see Amos 5:18; 8:9) "In that day declares the sovereign Lord,"I will make the sun go down at noon and darken the earth in broad daylight". Recall that the ninth plague of the exodus event was darkness over the land of Egypt for a period of three days—a darkness that could be felt (Ex. 10:21-22). After the plague of darkness came the death of the firstborn sons (Ex. 11:4-5). Darkness preceded death. Can you relate?

Likewise, on the cross darkness preceded the death of God's first born Son. Therefore on the cross, our sins were placed vicariously on the sinless Son and God poured out His judgment on Christ, our Substitute. Darkness as a sign of divine judgment highlights the substitutionary nature of Christ’s death. On the cross, Jesus endured the judgment of God upon our sin

(Gal. 3:13; "Christ redeemed us from the curse of the law by becoming a curse for us - for it is written" Cursed is everyone who is hanged on a tree." 2 Cor. 5:21; - God made him who had no sin to be sin for us so that in him we might become the righteousness of God. 1 Pet. 2:24."He himself bore our sins" in his body on the cross, so that we might die to sin and live for righteousness; "by his wounds you have been healed.").

Content created and supplied by: Phycologicalcounselormarsh (via Opera News )