Facts about the Mysterious Creature at T. B Joshua's Funeral 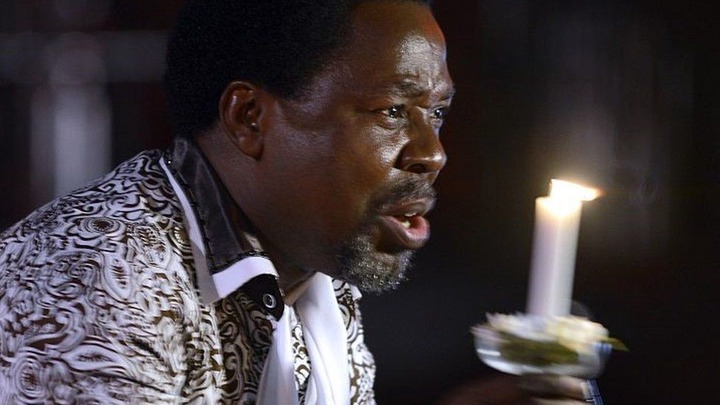 The internet has gone ablaze with stories of a mysterious creature appearing at the funeral of the late and famous Nigerian Prophet TB Joshua while mourners had congregated in a church where his coffin lay.

Videos have been made as well showcasing big media companies like the BBC and CNN alleged to have covered the same story, where by an angelic creature was presumed to be hovering above the late prophet’s casket.

A screen grab in one of the videos showing the alleged angelic creature. Courtesy

A lot of mixed reactions has been evidenced from the videos doing rounds on social media, with a good number of netizens believing it was actually true that the alleged mysterious creature was actually an angel from God who had come to take away Joshua’s soul and perhaps to showcase to the world that indeed he was a true servant of GOD.

However, a sizeable number has also come out to rubbish the claims, some stating that it was clear the image had been doctored. Others claimed BBC or CNN have not aired any news concerning a mysterious creature in the funeral and that all the photos with the two media company’s logo were photo shopped.

There are those who claim that the late Joshua was not a true servant of GOD and therefore, the creature, if indeed were there, could equally be a satanic angel.

While all these allegations may or may not be true, I would like to highlight a few things from the whole story that may make it true or false based on your belief.

To start with, as per my research, I have not encountered a single story done by the BBC or CNN suggesting that they indeed covered the story of a mysterious creature. This therefore, may have been doctored by social media enthusiasts to make their stories catchier. A screen grab in one of the videos showing the alleged angelic creature story done by CNN. Courtesy

Secondly, never judge a book by its cover, for Christians, it is clearly written in the Bible on how a group of people believed Jesus was not a true son of God and that his deeds on earth were satanic.

It is well stated in the same book that God warns us of false prophets mushrooming from all over the world to mislead and destroy the image of GOD.

Nowadays it is hard to believe who is who in terms of true prophets of God.

We have experienced people who claim to be men of GOD- supposed to live a clean and holistic life and serve as a true example- being found cavorting with other people’s wives or being implicated in s3xual scandals and money ritualism.

Yet again, we are living in a society where people believe if someone is smoking rich, a cult is involved.

We all need a spiritual uplifting if you are truly believers of GOD. Remember we also have the anti-Christ and those who doesn’t believe in existence of GOD. Whatever you choose to believe, let it be guided by your own spiritual being and don’t rely on hearsays.

'He Can Walk and Talk' Corazon Kwamboka Gushes Over Her Son With Fitness YouTuber Frankie.

Amber Ray And Hubby Show Off Their Under Pants After A Night Together Sparking Mixed Reactions.

How To Keep a Conversation Flow With Your Crush