By Jackiijerop (self meida writer) | 21 days 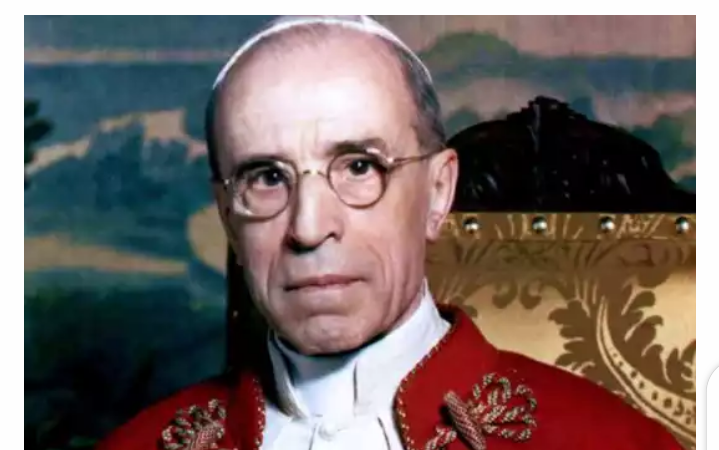 The year is 1945 when when the Soviet Red army liberated the Jewish concentration camps from the scourge of the German Nazis. The horrific Jewish Genocide which Hitler was responsible had claimed the lives of more than 6 million Jews and many millions of them were in concentration camps ready to die from Nazi experiments, gas chambers or shooting experiments. The remaining Jews were saved thanks to the allied forces and Russia who invaded Germany and put an end to the Nazi regime.

The Jewish persecution began in 1941 and went on through 1945 throughout the whole of Europe. Germany invaded Poland, Russia, France and the greater part of Europe retching havoc to the Jewish community. As Hitler and his lieutenants were doing all these, the catholic church which unified Europe was dead silent.

The pontiff at the helm of the Catholic church during the second world War was Pope Pius XII. He served from 1939 to 1958 and oversaw one of the most destructive political ideology that rocked Europe during his tenure. What shocked the world most was the church' s silence all that time.

The church witnessed Jews being Persecuted right to their doors and did nothing to prevent. Pope Pius will go down in history as the worst pope in the long history of the church after recent digging up information from the secret Vatican archives which unearthed his intentions as the second world War raged.

History scholars have come to give Pope Pius a nick name, ' Hitler' s Pope. Pius was an anti Semitic pope and this made him not give any stand as Hitler was arresting and Persecuting Jews. History has that through his cardinals and bishops in Germany, he legitimized the Nazi rule.

As a matter of facts, he made a pact with Italian leader and dictator, Benito Mussolini to avoid a civil war in Italy. Mussolini was an ally to Hitler who fought alongside him during the second world War.

Pope Pius silence was tactical in that he did not want to interrupt the persecution of the Jews. Other scholars argue that if he had ordered Germany to stop the Jewish Persecution, the Nazis would have matched to Rome and take captive the pope. So in order to protect the papacy and the church, he chose silence.

What the papacy did that made the Jewish life very hostile was the driving of all Jews into the Ghettos. The antisemitic pope alongside Benito Mussolini ruled that all Jews in Italy should wear certain cloths for their easy identification and that they should be forced into the ghettos. This proved to be very Catastrophic for the Jews in the few years to come.

The Italian Civil War which overthrew Benito Mussolini started when the second world War was picking up. The resulting power struggle tempted Hitler to invade Italy. The Fuhrer did invade a huge part of the country and installed his puppet rulers.

Apart from that, Hitler commenced the persecution of Italian Jews and more than 7000 of them lost their lives. The segregation of Jews in ghettos and having clothes that identified them made work easier for the Nazis to find and arrest them. What made the world very angry with the church is the papacy handing over of the Jews who took refuge in Rome to the Nazis. This alone lead to the death of more than 3000 Jews under Papal watch.

This act made the world believe that Pope Pius had sided with the Nazis to oppress the Jews and this was justified by his silence throughout the war.

The post war drama for the church and Pope Pius was not near from over. As the allied forces were hunting down the Nazi war criminals in Europe for trials against human rights abuse, the church through the papacy was busy organizing the escape of prominent Nazi politicians disguised as Bishops and priests to Argentina and other South American states.

It is even alleged that Hitler did not die but was smuggled into either the USA or Argentina. The Hitler who committed suicide with a cyanide pill might be his body double to fool the world.

The newly unearthed Vatican secret archives continue to shed more light on Pope Pius XII involvement in the Jewish Holocaust and the ultimate aiding of top Nazi leaders to flee Europe. The pope' s involvement in the Holocaust is not much talked about and were it not for the unearthing of the Vatican secret archives, this would have vanished In world history.

What do you think of Pope Pius, does he deserve the saint title which he still holds to date? Leave a comment below.

Robert Burale Reveals He Attempted Suicide Thrice, Once In UK And Twice In Kenya.(Video)

Meet the Kenyan man offering Muratina to the UK.

Justice At Last For Kenyans As 500,000 Citizens Are Set To Be Paid By The UK After Order By The UN