Why Dp Ruto Broke Into Tears Over This Emotional Story

By starlightstudio (self media writer) | 3 months ago

The man of God said at one time, he had to eat the dog's food as he did not have money to buy food

His story left the DP in tears, and he was spotted struggling to contain his emotions as the pastor detailed his struggle 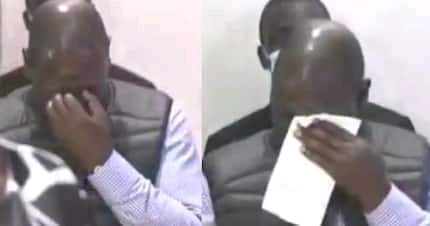 Deputy President William Ruto was on Saturday, October 2, left in tears after an emotional Murang'a pastor narrated how he beat all odds to become a man of God.

During a meeting on Kenol, Murang'a in which he had attended to launch a TV station owned by a bishop, the DP was spotted wiping tears from his eyes as the cleric detailed how he once struggled with poverty.

According to the pastor's testimony, he started out as a dog-feeder who would at times, eat the animal's food as he had no money to buy his own food.

As he said this, a teary Ruto wiped his uncontrollable tears while shaking his head, in apparent awe of how much the preacher had undergone.

"One time I did not have money, so they gave me KSh 300 to buy the dog some minced meat and so I took half of it and ate," he said struggling to contain his emotions.

The Murang'a preacher could not contain his emotions as he narrated his humble beginnings.

He also said he worked as a matatu driver and interestingly, a year ago, he and his family were living in a bedsitter but life has improved.

The emotional cleric also endorsed Ruto's economic model and said it uplifts the humble like him adding that it will without a doubt work.

"This model works. We are the bottom, and now we are up here. I never thought I could ever meet you (Ruto)," he added.

It is after this meeting with Murang'a clerics that the deputy president met residents and many Kenyans voiced their concerns after he appeared to pull a relatively small crowd.

From the photos shared, a section of Kenyans noticed the decline in the crowds he met during the stopover he made in Kenol, Murang'a.

This was contrary to his previous rallies in the locality which he is known to pull large crowds.

The concerned Kenyans attributed the decline to the recent visit by the ODM party leader Raila Odinga who had been accompanied by top-tier politicians from the Mt Kenya region.