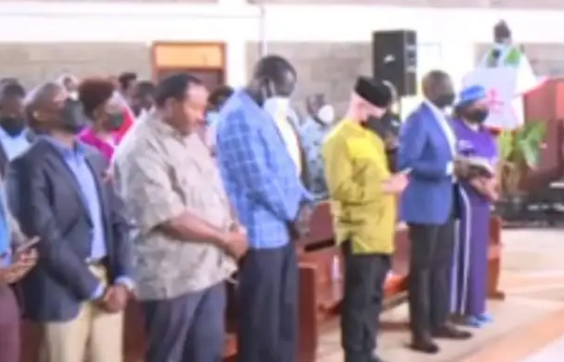 In what is now turning out to be a flexing of muscles war between Deputy President William Ruto and AIPCA Archbishop Julius Njoroge, and which the DP seems to be winning so far, the tussle was stretched over to the second straight Sunday.

This time, the theatre of war, where the battle was waged was at a Thanksgiving service at the A.I.P.C.A, St. Lorent Angaine Church – Timau, Buuri constituency, Meru County led by Bishop Samson Muthuri.

In what has perhaps designed to embarrass Archbishop Julius Njoroge even more, it was as AIPCA podium that was used to defy him.

To add salt to injury, the event which was used by the DP and his allies to defy the order that Archbishop Njoroge issued weeks ago was presided over by Njoroge’s own clergy, Bishop Samson Muthuri.

In the service, Meru senator Mithika Linturi took issue with the earlier directive that was issued by AIPCA Archbishop Julius Njoroge banning politicians from the podium, saying that this was tantamount to discrimination, and stereotyping all politicians as criminals.

DP Ruto was also able to not only gain access to the podium, but also address the congregation, which is contrary to a resolution the church had reached.

Just about two weeks ago, Archbishop Julius Njoroge, the Head of AIPCA in Kenya, banned politicians from using their pulpit.

In what was deemed as a preemptive attack on Ruto days to his Sunday visit to his Church that weekend, the Archbishop admonished politicians who use to pulpit to claim they have God and the people.

According to him, there’s only one God who sent his son to die for everyone, and anyone who claims to own God won’t be allowed in their Church.

However, in what appeared like a daring show led by the local leaders of the church’s Githunguri branch, not only did DP Ruto get a chance to address the church from the pulpit, but also contributed some donations.

Rigathi Asks Mourners to Take Care of Their Siblings, Reveals Brother Paid His Fee From Form 1 to 6