Why Jesus Called Himself the Alpha and the Omega 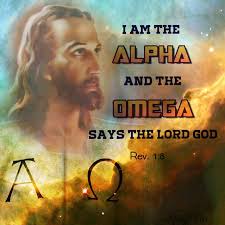 Jesus had a lot of titles in the Bible. Some were put on Him by others, but many of them Jesus gave Himself. There is a difference between a name and a title. Usually, a title indicates a metaphor where one thing is called by something else, such as "light of the world," or "bread of life" or "an open door."

There are more than150 titles for Jesus in the New Testament. However, this article focuses on just two of those titles: the Alpha and the Omega. Jesus refers to Himself by the titles in four places in the Book of Revelation. In most versions of the Bible, Jesus did not say just Alpha and Omega. He specifically said, "I and the Alpha and the Omega" by putting emphasis on "the" that indicates that He is more than the beginning and end of the Greek alphabet.

The Apostle John quotes Jesus as saying “I am the Alpha and the Omega.” Each time, the title is followed by an explanatory phrase, such as “the first and the last” and “the beginning and the end.”

Revelation 1:11 - I am the Alpha and the Omega, the First and the Last,” and, “What you see, write in a book and send it to the seven churches which are in Asia."

Revelation 21:6 - "And he said unto me, It is done. I am Alpha and Omega, the beginning and the end. I will give unto him that is athirst of the fountain of the water of life freely."

Revelation 22:13 - "I am the Alpha and the Omega, the First and the Last, the Beginning and the End." 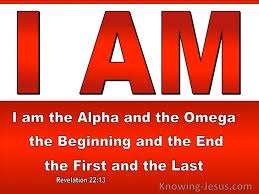 Greek is the original language of the New Testament. Alpha is the first letter. Omega is the last letter. When Jesus called Himself the Alpha and the Omega, He was saying, "I am the A and the Z." He also lets us know that He is the first and the last, as well as the beginning and the end.

So, if He is the beginning and the end and the first and the last, it stands to reason that He is also everything in between. Those titles recognized by many Christians to mean that Jesus has existed for all eternity and will continue to exist for all eternity. This is only true about God's Son, and Jesus is the only one who can make that claim.

Even though the original language of the Old Testament is Hebrew, Isaiah ascribes this aspect of Jesus’ nature as part of the triune God in several Old Testament scriptures.

Those scriptures indicate the eternal nature of the Godhead. Notice they are in the Old Testament before Jesus was born in the flesh.

The Alpha and the Omega

Jesus is the Alpha and the Omega in His eternal nature, His role in creation, His role in the universe, and His role in His fulfillment as the Messiah. Jesus has always existed, and He always will exist. He was the beginning and He will be the end.

Jesus is the Alpha and the Omega, the first and the last in so many ways. He is the “author and finisher” of our faith (Hebrews 12:2), signifying that He begins it and carries it through to completion.

Jesus is the beginning of grace through faith, not of works (Ephesians 2:8-9).

Jesus is the beginning and the end. God bless you all.