Who helped Jesus carry the cross, was he an African?

By Raphael munanga (self media writer) | 1 month ago 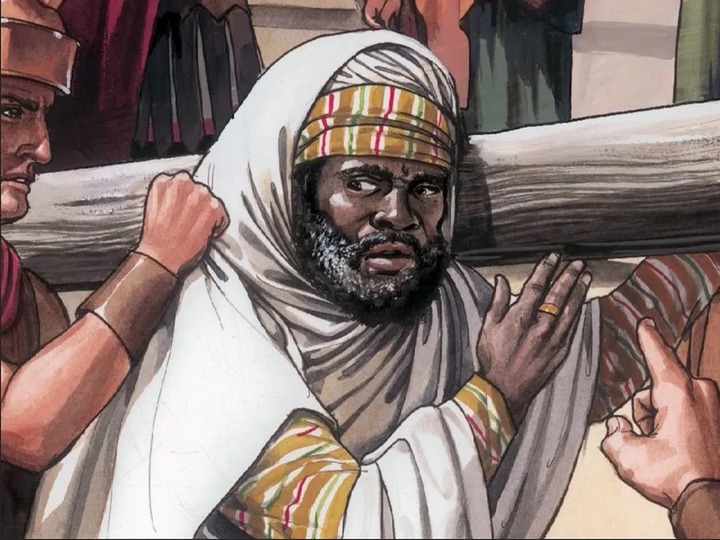 After being ruthlessly tortured by the Romans, Jesus was forced to carry His cross to the place where He would be crucified. At first, Jesus carried His cross (John 19:17). But, eventually, likely due to the extreme torture He had already endured, Jesus was no longer able to carry His cross. As a result, the Roman soldiers forced another man to help Jesus carry the cross.

Matthew, Mark, and Luke all identify the man who helped Jesus carry the cross as Simon, a man from Cyrene (Matthew 27:32; Mark 15:21; Luke 23:26). Cyrene was an ancient city in Libya, Africa. Its location has led to many traditional depictions of Simon as an African black man. It is possible that Simon was black, but, since Scripture does not say, we cannot be sure. Cyrene was a Greek colony and a major cultural center of Greek philosophy and medicine. The city also had a significant population of Jews and Jewish proselytes (see Acts 2:10).

There is speculation, based on some church tradition, that Simon of Cyrene later became a Christian—some theories state that he was already a follower of Christ before the crucifixion—and was a leader in the early church. There is also the tradition that the Rufus mentioned in Mark 15:21 is the same Rufus mentioned in Romans 16:13. If this is the case, then it would lend credence to the idea that Simon and his family were prominent in the early church. But, again, Scripture nowhere explicitly makes this connection between the two Refuses.

Simon of Cyrene was the man who helped Jesus carry the cross. For that, he is “immortalized” in the pages of Scripture. Hopefully, after receiving an extreme close-up of the suffering Jesus endured on our behalf, Simon of Cyrene also came to trust Jesus as His Savior. Simon may have borne the cross part of the way to Golgotha, but Jesus bore Simon’s sin (1 John 2:2).

Christians Are Encouraged To Pray At Midnight And 3am, See Why It Is Important

"Don't Make Strict Rules in Visa Application for Somalis in Kenya, They Voted For You" Uhuru Told

"I got a better deal than him, his work is just to count DP's votes" Azimio Leader Attacks KK Leader