By Azimio (self media writer) | 7 months ago

Murang'a Governor, Mwangi wa Iria, has welcomed a move by a group of elders to cleanse Mukurwe wa Nyagathanga Shrine following a ritual to install the National Assembly Speaker as GEMA Community spokesperson. 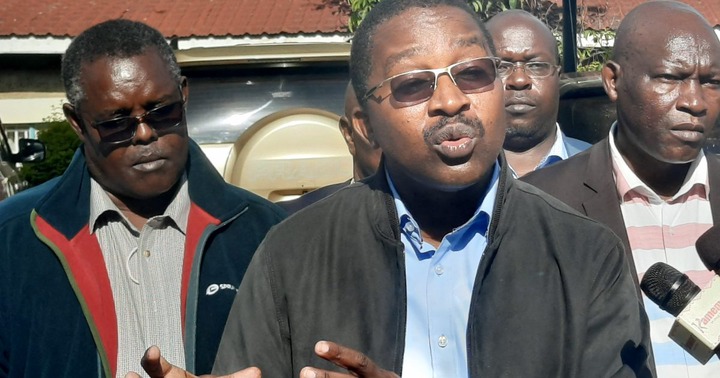 The Governor stated that he is behind the cleansing ceremony planned for Friday by a group of elders drawn from Kia-ma and the Kikuyu Council of Elders.

Some elders who arrived at the Governor's office to seek permission to hold prayers at the shrine and then at Mumbi grounds claimed Muturi's coronation abused the shrine because its purpose is to hold traditional prayers.

Wa Iria has been outspoken in her opposition to Muturi's coronation as GEMA spokesperson, claiming that the event could have taken place elsewhere rather than at the shrine.

For a long time, the Governor has chastised the elders, led by Patron of Kiama Kia-ma, Kungu Muigai, who were behind the installation event, labeling them as political brokers.

“I am in favor of cleaning up the Mukurwe wa Nyagathanga shrine. The involvement of police during Muturi's coronation at the shrine was wrong and disrespectful to the place where the Agikuyu community offered traditional prayers,” he said after meeting with the elders led by Njoroge Mugo, Vice Chairman of Kiama Kia-ma.

The elders intend to begin the cleansing ritual at 5 a.m. in the shrine, followed by prayers at the Mumbi grounds in Murang'a town.

So far, the organizers have obtained a permit from security agents to hold the meeting and have requested that the County Government send health officers to guide and monitor adherence to Covid-19 protocols.

Wa Iria stated that there will be no need for police officers because the event will be peaceful, assuring the elders that health officers will be present at Mumbi grounds to ensure that protocols to contain the spread of covid-19 are followed.

Muturi, who is from Mount Kenya East, was crowned as the GEMA community's spokesperson on May 22 by a group of elders.

Those behind the coronation claimed that they arrived in Muturi after lengthy discussions with elders from the Meru, Embu, Tharaka, and Agikuyu communities.

Speaking during the coronation ceremony, the Patron of Kiama Kia-ma accused those who were against the occasion, saying Muturi was crowned as a spokesperson and a person who will connect the communities in larger Mount Kenya and the government.

Wa Iria, who downplayed Muturi's installation, stated that Mount Kenya now has President Kenyatta as their spokesperson and leader, and that power brokers were after Muturi's money.

“We have a leader; how come you appoint another person to be a spokesperson when we already have power?” questioned Wa Iria.

More than 2,000 elders are expected to attend the event on Friday, with security officers on standby to keep the peace.

The elders also requested that the County Government staff the shrine so that it would not be abused by some individuals.

Hilarious Cartoons: Why Kalonzo Is Reluctant To Work With Raila Amid The Looming OKA Fallout.