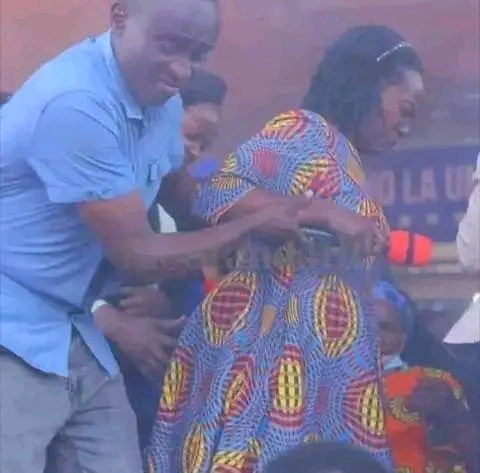 Former Gichugu constituency member of Parliament Hon Martha Karua who is the Azimio La Umoja-One Kenya coalition party deputy presidential candidate, had broken silence on the chaos that were witnessed in her rally in Kisii county yesterday.

While addressing Nyamira residents, Karua stated that she can not be threatened by a teargas and that she is determined to deliver the votes despite all the challenges.

She added that Kisii county is like a home to her and that no one can scare her. The former Justice and legal affairs minister further delivered the message she intended to pass to the Gusii women.

"Jana mliona yale yaliyotokea Kisii Stadium, Mimi siwezi tishwa na moshi kidogo, na ndiposa nimerudi ndio wajue hawatuwezi na fitina kidogo" she said loosely translating into, yesterday you saw what happened in Kisii Stadium, I can not be scared with flames and that is why I am back here for them to know that they will not manage us with threats.

She urged them to rally behind the former prime minister as he has given women opportunity to rise into power by nominating her as his running mate. She urged them together with other Kenyan women to come out in their numbers to vote for their ticket in August polls.

Karua's rally was cut shortly after a teargas canister was thrown to the dias, the police has so far arrested a police officer in connection with the chaos and was to be presented in court today as further investigations on the same is being carried out by the Directorate of Criminal Investigations.