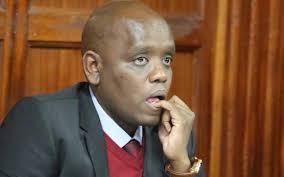 Kenyans will be voting in different by elections scheduled to happen on 18nth may 2021. People of Bonchari constituency in Kisii and those of Rurii ward are going to elect their representatives after demise of those who held the position. People of Juja constituency are also expected to decide who will be their leader. The race is between jubilee party candidate and that from Moses Kuria party.

Well, there are reports of police harassment ahead of the by elections. In Kisii Orange democratic party members have been on record claiming that interior security cabinet secretary Honerable Dr Fred Matiangi was using police officers to frustrate their candidate. Through Twitter handle, Orange democratic party communication director Mr Philip Etale claimed that police officers had camped at a hotel with an aim of arresting ODM part national treasure Honerable Bosire.

"The heavy presence of police officers in BONCHARI is a clear indicator that some people have panicked and sensed defeat. They know very well that come tomorrow evening, a candidate who is not theirs will WIN the election. A Kipipiri will be repeated here in Bonchari." Posted Philip Etale.

Well, Blogger Denis Itumbi has claimed that the deep state has arrested UDA party representatives in kirii ward by election. With an aim of intimidating them.

"RIP, You Will Be Greatly Missed" So Sad As Raila Odinga's Ally Gladys Wanga Mourns Midiwo