By Josephlesegeem (self media writer) | 6 months ago 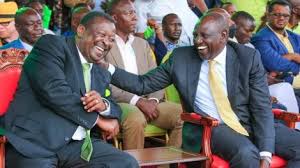 Politics have became the hot topics in Kenya as only six months remaining to the long waited day of date 9 of August. It is the day that voters will make their final decision on the successors of the current leaders. The hottest contention is the presidential seat that involves the battle between the most fiercest political rivals Raila Amollo Odinga of ODM and UDA boss William Samoe Ruto. Apart from the two, other leaders shown interest to vie for that powerful position. ANC's Musalia Mudavadi had been optimistic man towards that position but the story picked another direction after Musalia announce his coalition with UDA on Sunday of 23rd at Bomas of Kenya.

Following that, many leaders came out defining their expressions towards that unbelievable act. ODM allies greatly criticized Musalia for deciding to climb wheelbarrow instead of even standing by his own. Mudavadi's act was just one the many political waves experienced in last years.

Nominated MP Gideon Keter expressed these political changes as dictatorship, according to his post shared on Twitter page, he stated that it is much better to run away from politics of conmanship and dictatorship.

Content created and supplied by: Josephlesegeem (via Opera News )

Provisional Presidential Results As At 11:30am