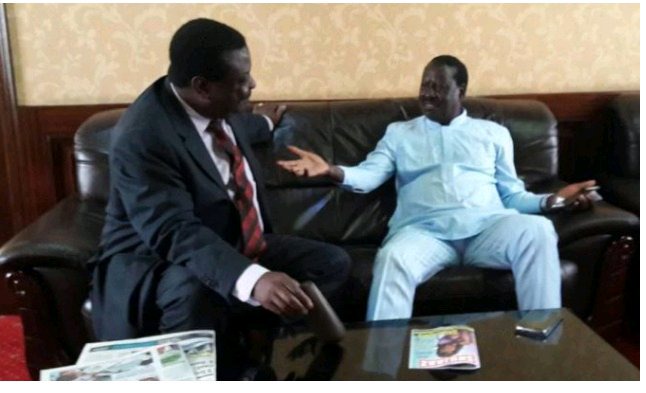 The relationship between the former prime minister Raila Odinga and One Kenya Alliance is in limbo after the ANC leader Musalia Mudavadi announced that he was not welcomed to his event which is scheduled to take place on Sunday, January 23, 2022.

The ANC leader is expected to make a major announcement on his political future when the party’s National Delegates Convention (NDC) converges at the Bomas of Kenya on Sunday.

However, unlike similar events organized by other OKA principals and where Raila has always attended, Mudavadi’s party has declined to invite the opposition chief.

According to ANC’s Secretary General Simon Gikuru, Raila is their competitor and had no reason to attend the event.﻿

"We have already invited OKA principals. I have not seen any invitation for Raila. Neither have I seen one for Jubilee. Why would we invite our competitors when we are launching our bid for the presidency? To come and do what?" Gikuru added.

The party is yet to confirm whether the Deputy president William Ruto will be attending the event, they have, nevertheless invited the Wiper party leader Kalonzo Musyoka, Ford Kenya leader Moses Wetangula and KANU party leader Gideon Moi.

This cones amidst talks of Ruto trying to woo both ANC leader Musalia Mudavadi and Ford Kenya leader Moses Wetangula to his side ahead of the upcoming general election.According to the second in command, in one of his previous tours to the Western region, said the two leaders, just like him, have been ignored by powerful forces keen to have Raila Odinga as the next President of Kenya.

The DP expressed willingness to work with the two key OKA principals in order to defeat the Raila.During that tour, he appeared to ask the residents to push Mudavadi and Wetangula into agreeing to work with him.Wetangula has previously confirmed that he is open to having discussions with Ruto and any other leader who has the people’s interest at heart.

He claimed that unlike the ODM party leader, Ruto recognizes who the Western Region kingpins are and is more intentional in his approach to drumming up support for his presidential bid.

5 Deadliest Roads In Kenya That Have Claimed Many Lives

Why Most Of The Cars That Are Sold In Kenya Are Not Warrantied By The Manufacturer.

Rayvanny's Ex Girlfriend, Fayvanny Posts a Video Without Filters as She States That She is Beautiful