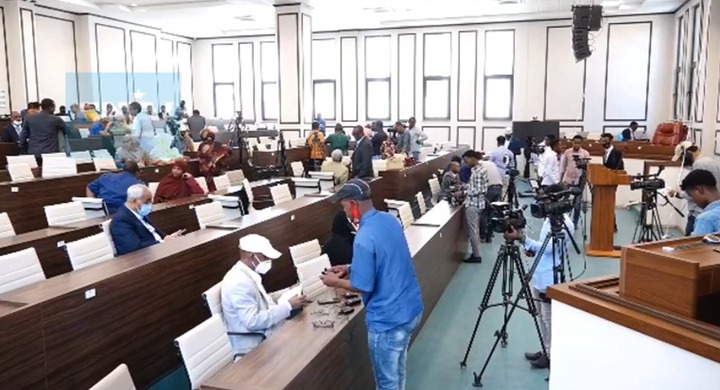 On Saturday, Somali Members of Parliament convened at the Parliament Headquarters for a special sitting aimed at settling the ongoing tension in the country over the extension of President Mohamed Abdullahi Mohamed popularly referred to as Farmaajo term as the president.

With the country divided into section with some group supporting the extension of Farmaajo's term by two more years while other opposing this move, many have been forced to flee their homes due to a tensed environment.

The heightened tension in the country has forced Farmaajo to fall back and is expected to address the parliament today so that his fate can be decided.

"MPs gather at parliament hall in Mogadishu shortly before outgoing president’s arrival. Farmajo is expected to request MPs to roll back an extension of his term. #Eritrea-trained Dufan troops deployed outside parliament HQs and roads leading to presidential palace. #Somalia," wrote

Ahead of the highly anticipated meeting, troops of highly trained soldiers were deployed outside the parliament building to make sure that no attacks take place during this crucial meeting.

Farmaajo's move to sign into law the extension of his term limit was criticized even by the western countries noting that this will only sink the country into war.

One School Is Closed In Kisumu, A Few Days After Reopening As Snakes Conquer The School Compound

TSC Latest Message To Teachers That Shouldn't Be Taken For Granted