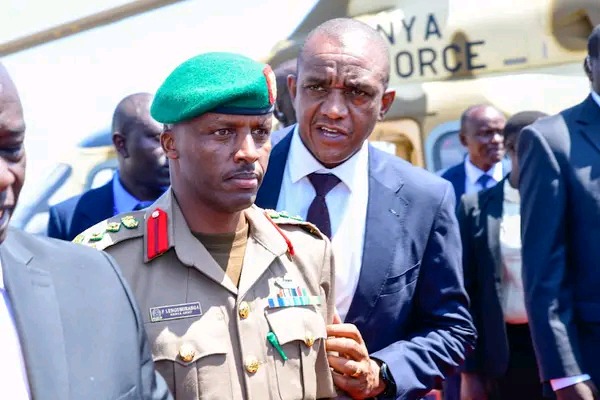 Colonel Fabian Lengusuranga has been picked as President William Ruto's new Aide-de-camp to replace Brigadier Timothy Stelu Lekolool, who has been redeployed to the Department of Defence ( DoD).

Colonel Lengusuranga first stepped out with President Ruto in Nyeri where the Head of State is attending the funeral of Deputy President Rigathi Gachagua's elder brother.

Brigadier Stelu has been with the President for the last three weeks since he crossed over to Dr Ruto having served retired President Uhuru Kenyatta since 2018, when he replaced Colonel Victor Mburu.

In July this year, he was promoted to the rank of Brigadier by the then President Uhuru Kenyatta. By so doing, Brigadier Stelu became the first person of his rank to serve as the President's ADC

At this point though, little is known about Colonel Lengusuranga ,who is now Dr Ruto's chief aide. But for Brigadier Stelu who has stood behind the two Presidents for the last four years, it is time for new assignment. As for the President's new ADC, all eyes will be on him.

We Will Go to Ruto’s House So He Can Feed Us, Sifuna Tells Ruto What Kenyans Will Do to Him

Do You Know Baobab? Here Are The Health Benefits To Your Body

Kenyatta National Hospital Doctors Reveals What Was The Cause Of Baby Travis Death.