By Newsnus (self media writer) | 4 months ago 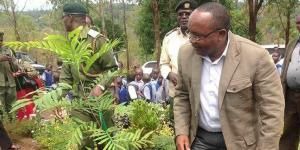 Former Tharaka Nithi Governor, Samuel Ragwa has announced he will vie for the county senate seat in the upcoming 2022 General Election.

Ragwa, who is an ardent supporter of Deputy President William Ruto, joins the long list of top and senior politicians who have chosen to vie for what some Kenyans consider to be 'smaller' seats in the upcoming polls.

Siaya Governor, Cornel Rasanga was the first governor to declare he will run for a parliamentary seat after his second term as governor comes to an end in 2022.

Rasanga last week declared that he will be vying for the Alego Usonga seat in the 2022 General Election, stating that he was too young to retire from politics.

Speaking on September 10, the former Tharaka Nithi governor indicated that he believes the money allocated to the counties is too little, compared to what remains with the National Government.

Ragwa said he wants to be in the senate so that he can fight for devolution and ensure that more funds are sent down to the grassroots.

The politician said it is unfair for the forty-seven devolved units to get only a tenth of the approximately 3.8 trillion national budget.

“I am going to fight for the remaining amount. I am specifically going to ensure the money that remains in Nairobi trickles down to counties,” he stated.

The current senator for Tharaka Nithi, Kithuri Kindiki, praised the former governor for the bold move, terming him "an appropriate successor for his seat".

The politician said the 2019/2020 financial year budget by the National Treasury, Tharaka county got 1.24 billion against a population of 393,177.

He said besides being a member of The Service Party (TSP), he is rooting for the presidency of Deputy President William Ruto come 2022. 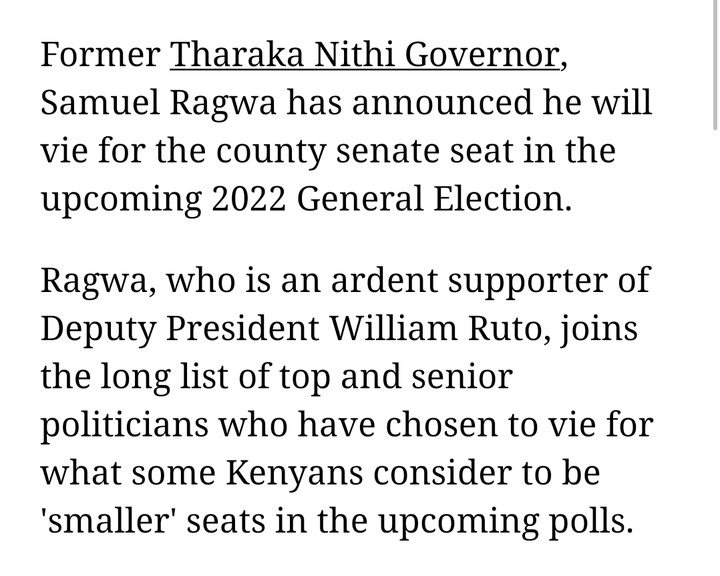