Money Mama Ngina Kenyatta Earns From The State Per Month. 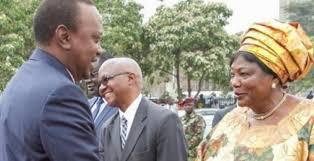 President Uhuru Kenyatta's mother Mama Ngina Kenyatta has been receiving a monthly pay in excess of a half a million per month amid reports that the expenditure on presidency has been increasing.

Official documents from the presidency seen by business daily indicate that Mrs kenyatta receives Ksh 577, 500 monthly at taxpayers' expense for being the spouse of Kenya's first president Jomo Kenyatta who died in 1978.

According to treasury sources, the payment to Ngina is tied to the law that provides for a spouse of a sitting president to be paid 40 per cent of the current salary paid to the sitting head of state should their husband die.

Reports from the presidency indicate that the former first lady has been receiving the money before her son Uhuru Kenyatta became President in 2013.

At 40 percent of the sitting president’s salary, Mrs Kenyatta is in line for a Sh577, 500 monthly pay.

“Spouse benefits upon the death of a serving President or of a retired President who is in receipt of or who is entitled to a pension under this Act, his surviving spouse shall be entitled to benefits amounting to 40 percent of such pension,” says the Presidential Retirement Benefits Act.

The monthly Pension of retired president Mwai Kibaki is set at 80 per cent of the current salary paid to the sitting president besides other benefits like fuel, house and entertainment allowances.

Following the death of former president Daniel arap Moi, the exchequer stopped funding his family given that he wasn't survived by a spouse.

Do you Support this law on Pension? Feel free to share your thoughts and comments on this on our comments platform. 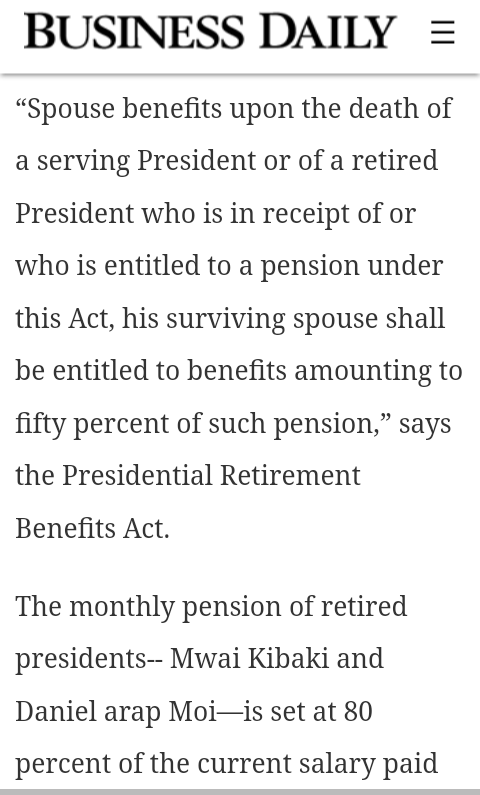