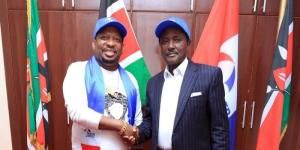 Wiper leader, Kalonzo Musyoka, has insisted that Mombasa gubernatorial candidate, Mike Sonko, will be on the ballot in the August 9 polls.

Speaking at an event in Mombasa county on Friday, June 1, the former Vice President revealed that he was working around the clock to ensure that the former Nairobi governor is cleared to run for office.

Kalonzo stated that Sonko was suited to vie, adding that he had great plans for the coastal city.

"I have been struggling to have governor Mike Sonko become the governor of Mombasa and I am still on it and he will be deputised by Ali Mbogo.

"Sonko had already talked to some companies in Sweden and it is time to do the distilling of water in the Indian Ocean and give to our people good water. We have to be doing great things in the 21st Century. Mombasa is so important and I have had the dream of making it Dubai," he stated.

Further, he refuted claims that the Azimio La Umoja team was behind the sale of the Port of Mombasa to a Dubai firm insisting that it was still part of the city.

"We are now seeing reports about who may have sold the port and ridiculous arguments in the media. The truth is that we need a free port in Mombasa and if we win, we will create our own Dubai here."

The Wiper leader made the statements in reference to Sonko's decision to seek court's intervention in stopping the Independent Electoral and Boundaries Commission (IEBC) from printing ballot papers and the Wiper party from replacing him with another candidate.

While making its determination over Sonko's eligibility to run for office, the IEBC dispute committee directed the Wiper party to find a replacement within 24 hours.

However, Kalonzo's party failed to submit a name to the electoral body citing an appeal that the former governor had filed at the Appellant Court.

On the other hand, IEBC warned the party that it risked being locked out of the race given the tight time schedule the Commission was operating on.

“We will follow the law but if he has gone to the High Court, we will heed the court’s decision,” IEBC vice-chairperson, Juliana Cherera, stated.

Handshake Looms As Efforts to Unite, Uhuru Ruto and Raila Takes Off