Nandi Senator Samson Cherargei has assured Deputy President William Ruto's running mate, Rigathi Gachagua, that the Rift Valley Region is behind their presidential ticket, and will be campaigning for them across the region.

Speaking during Kenya Kwanza Alliance Rally that took place in Nandi Hills Constituency on Wednesday, with Gachagua as the leader, Cherargei expressed his optimism that the Kenya Kwanza Camp will form the next government.

Reacting to Gachagua's appointment as Ruto's DP, Cherargei said that the Rift Valley residents were satisfied with his nomination, saying that the Mathira member of parliament has been among the most loyal Ruto's lieutenants from Mount Kenya Region, and he had no doubt that the duo will work for the sake of the country if they win in August. 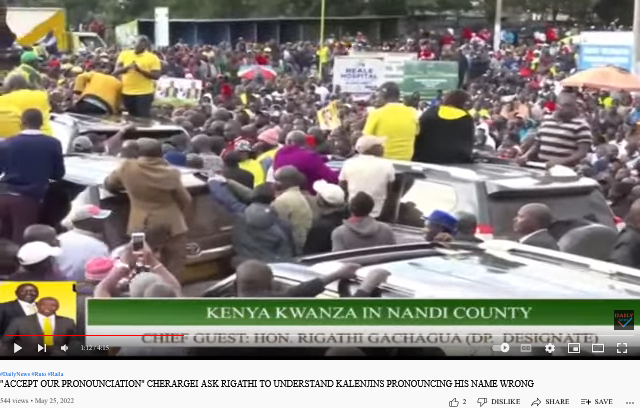 "These people from Nandi were happy with your nomination, and we thank you for accepting the appointment. You have been loyal to DP, and you have gone through a lot because of your association with him. We are behind you and Ruto,' said Cherargei.

He further called upon the president to concentrate on his legacy, and allow a neutral political space for all those seeking to succeed him after endorsing the ODM leader Raila Odinga's bid.