By Masonhaz10 (self media writer) | 1 month ago

The deal signed by Azimio la Umoja One Kenya parties on March 12 at KICC grounds locked the partners in the coalition until three months after the elections.

Signatories to the deal, including Kalonzo Musyoka’s Wiper, cannot leave the coalition six months to the elections or three months after without running afoul of the law.

The deed of agreement signed on March 12 and obtained by The Standard says parties may give a 90-day notice to withdraw from the coalition, which now takes them beyond the election date.

However, Dr Alfred Mutua’s Maendeleo Chap Chap and Amason Kingi’s Pamoja African Alliance have thrown caution to the wind, and left the coalition without following the laid down protocol. They have signed fresh deals with Deputy President William Ruto led Kenya Kwanza coalition.

Mr Musyoka was among the first to blow the whistle, saying most parties including his own, did not know what they signed up to. He also spoke of some “deep understanding” between him, ODM leader Raila Odinga and President Uhuru Kenyatta.

"Where any coalition partner is aggrieved and asserts that there has been a breach of this agreement or its performance is frustrated, it shall by a written resolution of its highest decision making organ refer the matter to the dispute resolution panel,” Article 24 reads.

In the deed, President Kenyatta and Mr Odinga were granted a prime opportunity to constitute the initial Council, the party’s top decision making organ. Article 23 of the transitional provisions of the deed said the party leaders of Jubilee and ODM would agree on the first chairperson, party leader, deputy party leader and members of the coalition council.

In another Article, however, the function of selecting the Council is given to Mr Odinga, Mr Kenyatta, Mr Musyoka and “authorised representatives of Mwanzo Mpya caucus.” 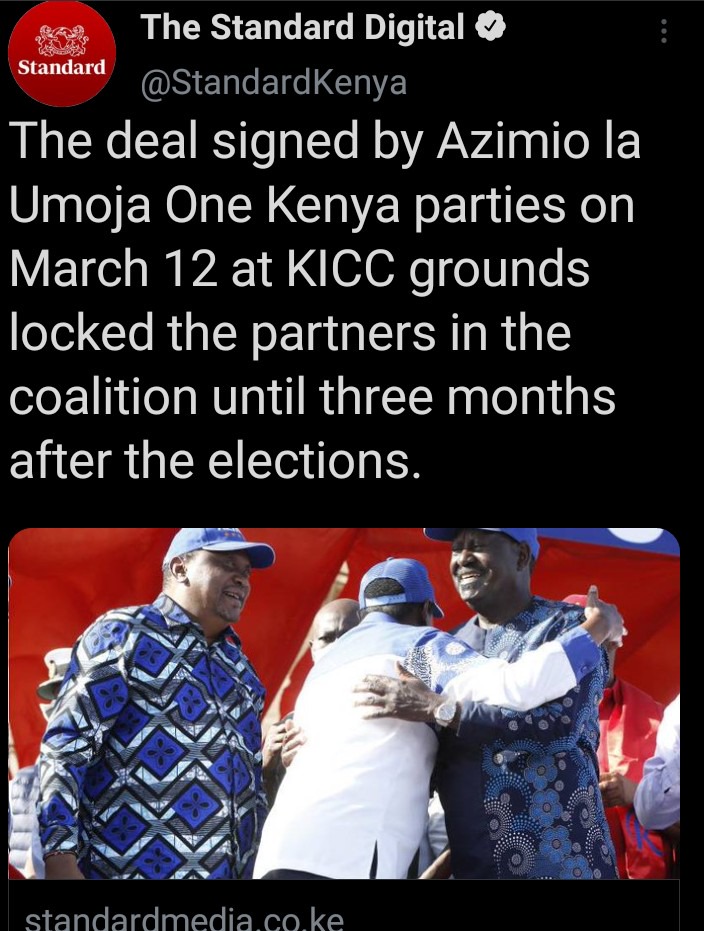 Initial versions of the deed had talked of the council chair as the convenor of the Council. In the initial meeting of the Council, President Kenyatta chaired. In the real deal however, Raila will convene the Council as the party leader.

The coalition can be dissolved on three grounds; on mutual agreement of the Uhuru chaired Coalition Council, where the number of constituent parties fall below two and at the expiry of parliament that will come after the August poll.

“The admission of new parties to the coalition shall be the function of the Coalition Council,” the deed reads.

The deed does not indicate how power will be shared between the coalition parties. The closest it comes is Article 11 on Organization of Government. It simply states the parties to the coalition shall form a coalition government. 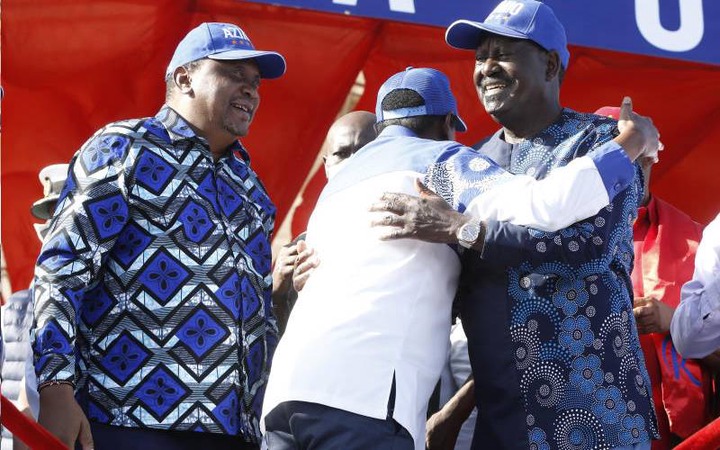 The deed also set up a powerful national disciplinary committee which has the power to penalize, suspend, expel, fine and de-whip members on account of disloyalty, corruption, gross misconduct, advancing positions contrary to party wishes, failure to take up party instructions, disobedience or allegiance to another party.

The agreement adopts the original Azimio pillars of the 5U’s- utu, undugu, usawa, umoja and uzalishaji. The objectives of the party include formation of inclusive government, defending the Constitution, uphold dignity of all individuals and communities, creation of an internationally competitive nation and fostering equitable distribution of opportunities.

The coalition parties are required by the deed to mobilise resources to achieve the objectives of the coalition agreement. The parties shall share the financial obligations necessary for the management of the coalition but will share political party funds once in power.