By Polycap_Onderi (self meida writer) | 14 days 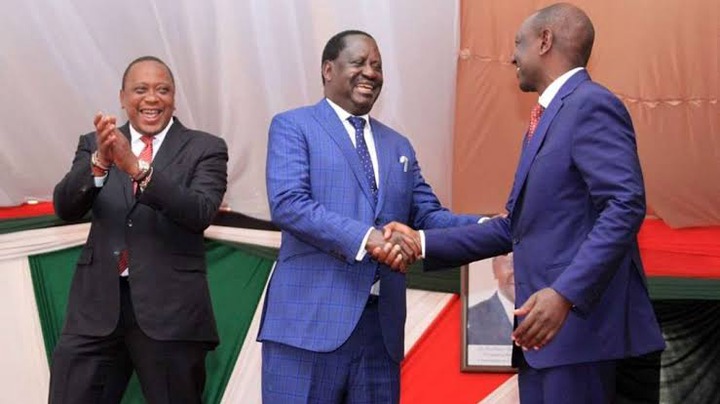 Kenyatta's candidate for the 2022 presidential elections has been losing his backers one by one as turn to support his rival, Deputy President William Ruto.

The handshake between former opposition leader Raila Odinga and newly re-elected president Uhuru Kenyatta got the campaign to succeed Kenyatta off to a premature start. Odinga has been battling since then against William Ruto, who has himself been abandoned by the head of state. The seemingly never-ending campaign for the presidential elections, which are due to take place on 9 August 2022, has crystalised around the Building Bridges Initiative, a constitutional referendum championed by Kenyatta et Odinga. As they prepare for the referendum, both candidates have set their electoral machines to work to win political and financial support.

Musalia Mudavadi and Mukhisa Kituyi are positioning themselves to replace Raila Odinga as Uhuru Kenyatta's runner-up.

While Kenyatta favourite Raila Odinga reaches out to the opposition, Musalia Mudavadi and Mukhisa Kituyi have called on their sponsors to support their bid in State House to be designated as the president's new candidate.

UN veteran Kituyi, who entered the presidential race in January, is backed by an array of hitherto neutral businessmen close to President Uhuru Kenyatta. This is only adding to the paranoia of Raila Odinga, who hopes to see his own candidacy blessed by the head of state.

The question is, who will now go to state house?

Content created and supplied by: Polycap_Onderi (via Opera News )