By Petertherock (self meida writer) | 1 months 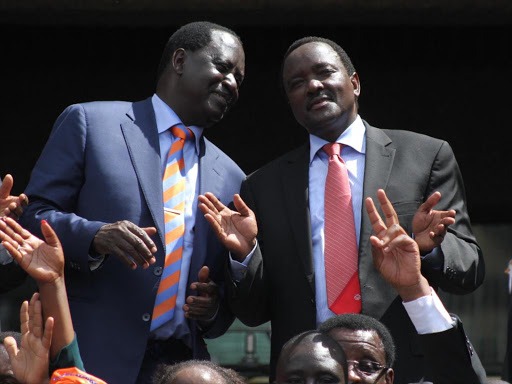 Kalonzo Musyoka, the leader of the Wiper Party, urged former Prime Minister Raila Odinga to back him in the 2022 General Election on Friday, July 30.

Kalonzo is on a three-day tour of the Coast region, rallying support for the Wiper Party’s presidential bid next year.

The former Deputy President pledged to back all Wiper candidates from the ward level up in order for his party to win the most seats in the upcoming elections.

He also warned his fans to stay away from dishonest politicians who take advantage of their predicament but have no plans to help them improve their life.

Musyoka declared at Akamba Handcraft in Changamwe that if the ODM Party leader chooses to be his running mate in the General Election, he is willing to cooperate with him.

“I am delighted to see my big brother Odinga, whom I have backed in his political career for more than a decade.

“What I’m saying is that there’s no political debt,” Kalonzo continued, “but I want him to use his wisdom and join me as my running mate so that we can bring this country forward.”

Kalonzo stated that he is focused on being on the ballot in the General Election next year and that he would not succumb to the idea that he is a weak candidate.

The Wiper leader also expressed hope that Odinga would join the One Kenya Alliance (OKA), but on different terms than the NASA coalition.

Meru: "When Our Next President Ruto Was Helping Churches You Shouted" Mudavadi Put To Task Over Cash