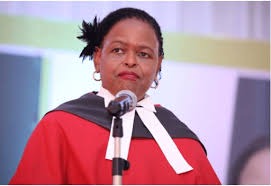 Martha K Koome became the first woman under the 2010 Kenyans constitution to be the Chief Justice and the president of the Supreme Court of Kenya. She presided over the recently concluded hotly contested 2022 presidential election petition against the election of president William Samoei Arap Ruto. But she upheld the results causing uproar across the country after evidence showed openly that the IEBC servers were tempered with.

CJ Martha Koome has been left exposed as what she has been hiding about the presidential election petition is publicly revealed. According to a vocal City Lawyer Ndegwa Njiru, he revealed that during the presidential election petition, CJ Martha Koome said that there were distinguished jurists observers led by Chief Justice Emeritus of Tanzania. But what is raising eyebryis that ever since, CJ Martha Koome has never publicly disclosed their report. The question remains, what could she be hiding? Your guess is as good as mine.

"My Lady @CJMarthaKoome during the presidential election petition u informed the nation that there were distinguished jurists observers led by Chief Justice Emeritus of Tanzania. I assume they compiled a report therefrom, when will you make it public if not why?" Tweeted by City Lawyer Ndegwa Njiru 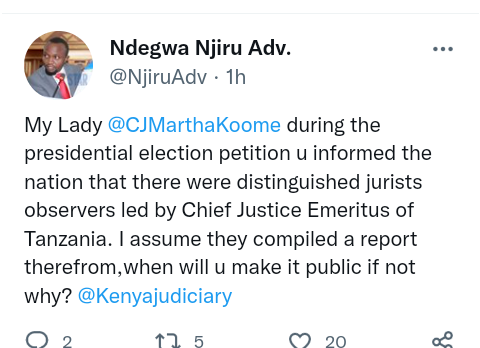