By FrankPundit (self meida writer) | 9 days 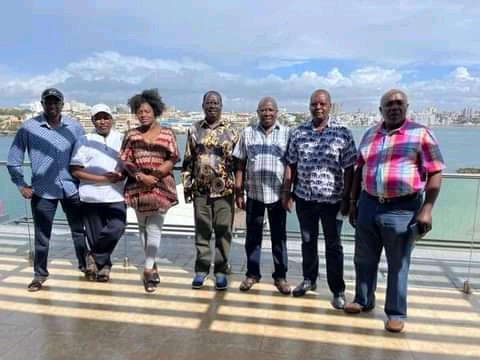 Barely 20 minutes after ODM leader Raila Odinga shared a photo of himself and a section of Mount Kenya leaders holding a meeting in Mombasa, Deputy President William Ruto camp has already given a reaction.

In a photo shared by the former Prime Minister, some of the leaders who are in attendance of the said meeting are Youth Affairs Chief Administrative Secretary Rachel Shebesh, National Assembly Majority leadet Amos Kimunya and Nominated MP Maina Kamanda.

But while dismissing the meeting, Gatundu South MP Moses Kuria, a key ally of Deputy President William Ruto, said that the said retreat is inconsequential.

The Mombasa meeting between Raila and the allies of the President comes barely a week since the Jubilee Party suffered a humiliating by-election defeat in Kiambaa at the hands of Ruto's United Democratic Alliance candidate Njuguna Wanjiku.

The DP's camp has since insisted that the Kiambaa constituency by-election defeat is the end of the ruling party which has been experiencing a wave of defections in the last few months.

But the President's camp has remained optimistic, insisting that Jubilee Party will only get stronger ahead of the 2022 general election. Perhaps, the Wednesday meeting between Raila and Uhuru's men is part of the wider plan to strengthen the troubled giant party.

ODM Ally Claims That Ruto Started His Bottom-up Approach When He Was URP Leader, Exposes This Video

"That Strategy Might Backfire on him Ahead of 2022," Mt Kenya Residents Finally Warn DP Ruto on This

WHO IS WHO? Current State of Politics in Kenya Ahead of 2022