With the political heat surrounding the upcoming 2022 General elections, the two main candidates known to be eyeing the country's presidential top seat are in the verge of doing everything possible in winning the hearts of the citizens who are suppose to vote them in as the next president coming next year . The former Prime Minister Raila Odinga and Deputy President William Ruto are the two main battalions being eyed for the same.

The two, despite their political differences have been doing their best in showing good relation with the people of the different communities.

Today Sunday, 26th Sept, the two leaders held a rally talks with some of the citizens in the different counties. With Raila being at Laikipia County while Ruto in Meru County. This happened immediately after the two were done with their church services. Ruto engaged the Wananchi at Makutano in Meru town whereas Raila held his in Nanyuki town.

Both the two seemed to were welcomed by hundreds of people just after their church services. However comparing the two, one can tell which of the mammoth crowds have many people than the other.

However, even so the Deputy President William Ruto seems to have won so many hearts in both the regions as his crowd seemed to be more than that of former Prime minister Raila Odinga. And even despite Raila being at Laikipia county, while addressing the citizens chants were heard from every corner saying "Ruto! Ruto" with others telling the former Prime Minister off that Nanyuki is for Deputy President William Ruto and the United Democratic Alliances (UDA), meaning the people of Mt Kenya region have set their mind on whom they would like to have as their next president.

Here are some of the photos showing how crowded both the leaders were: 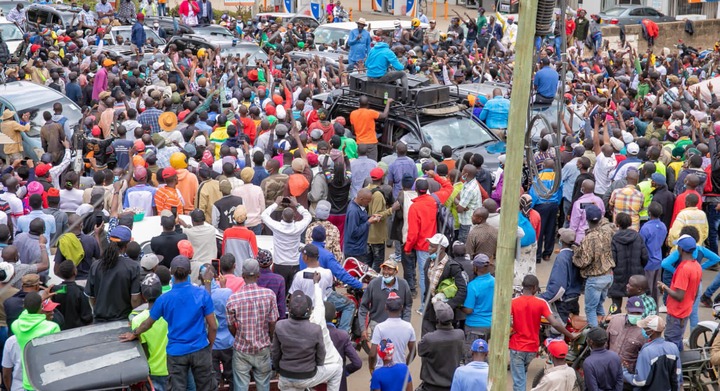