ODM Top Leader Speaks After Ruto's Statement, Reveals What Raila Will Do if He Succeeds Uhuru

The statement by the deputy president William Ruto that president Uhuru Kenyatta have him a secret very early on how to secure Mount Kenya votes is still eliciting reactions especially from the leaders allied to Raila Odinga.

According to Philip Etale who is the Director of Communications in ODM, the former prime minister Raila Odinga did not start 'climbing Mount Kenya' the other day adding that his Mount Kenya journey started back in 1970s. 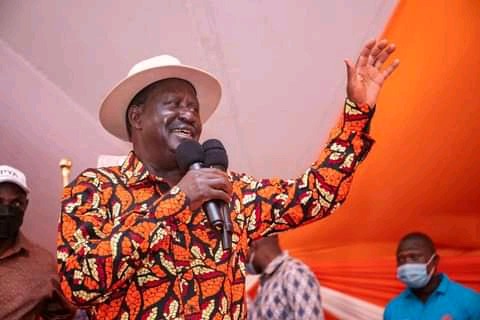 "Our party leader Raila Odinga has been climbing mount Kenya since 1970s. What is ist that tangatanga leader has done to Mount Kenya?" He said though his facebook page.

Etale further revealed that if Raila succeeds president Uhuru Kenyatta in 2022, he will ensure that all the proposals that were in the BBI bill like additional of more resources to the county and one man one vote one shilling will be implemented.

"Addition of more constituencies, 35% county disbursement, all were in the BBI will be implemented upon the assumption of presidency by our party leader," he added.

Presidential hopefuls especially the deputy president William Ruto and Raila Odinga have been making effort to secure the vote-rich Mount Kenya region. The region has the highest number of registered voters and hence likely to determine the presidential election outcome. 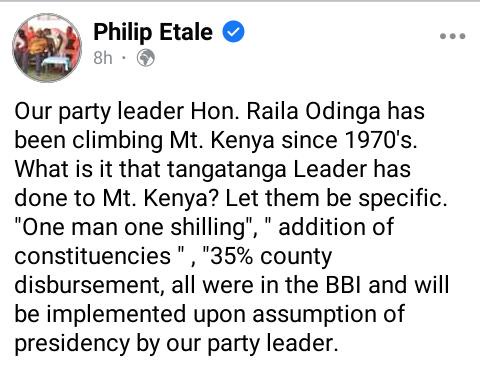