By jupiternews (self meida writer) | 13 days

To many,the March 2018 handshake between President Uhuru Kenyatta and opposition leader Raila Odinga came as a horrific event.The duo had been long term political arch-rivals.But after the 2017 elections and the eventually repeated polls,the two warmed up to one another-a matter that puzzled even their close confidants.

Raila is politically witty and tactical and him extending a working hand to the head of state was not merely a storm in a cup of tea.The engament of the two principals had deeper meaning,concealed deals and political arrangements.

Having waded in the political scene for quite some times,the duo know very well the essence of scratch-my-back I scratch yours.The move was timely and not coincidental.

Going back the historical anals of Kenya,it's quite clear and in public domain what transpired between the founding fathers Mzee Jomo Kenyatta and the opposition doyen Jaramogi Odinga.The two families had many common aspirations but ideologically differed to an extent of viewing one another as foes other than friends.

The Kenyatta-Odinga factor was dilluted by the incoming of the Moi in political limelight.The aspirations that were held by the Kenyatta family were safely guearded and carried forth by the late Daniel Toroitich Arap Moi.It was this that culminated in Moi's endorsement of Uhuru Kenyatta in 2002 general elections.

To fully continue with the reciprocationary spirit, Uhuru Kenyatta has to equally give back to the Moi's family.This would only materialise if there exist no political barrier in his succession matrix.This barrier is none other than the Deputy President William Samoei Ruto.To counter Ruto's influence,Uhuru had to use Raila in whom he believed his presence would automatically lead to Ruto's exit.

Raila's role then was to dillute the bromance between Uhuru and Ruto and therefore indirectly uplift Baringo Senator Gideon Moi near the leadership apex.

What remains is to see the impact and the role of Raila in Uhuru's game plan.Should Uhuru endorse Raila for the top job,the chances of Gideon Moi creeping up the leadership ladder will be highly evident.

In a nutshell,the handshake was to end Uhuru-Ruto engament and a deliberate move to uplift Gideon Moi up closer to the political ladder awaiting the settlement of debt. 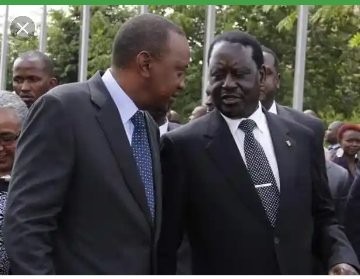 " I Am Not Afraid Of Those Threatening Me'' Ruto Says