JUST IN: The 4 IEBC Commissioners Speak, Outline Issues of Why Presidential Results is 'Opaque' 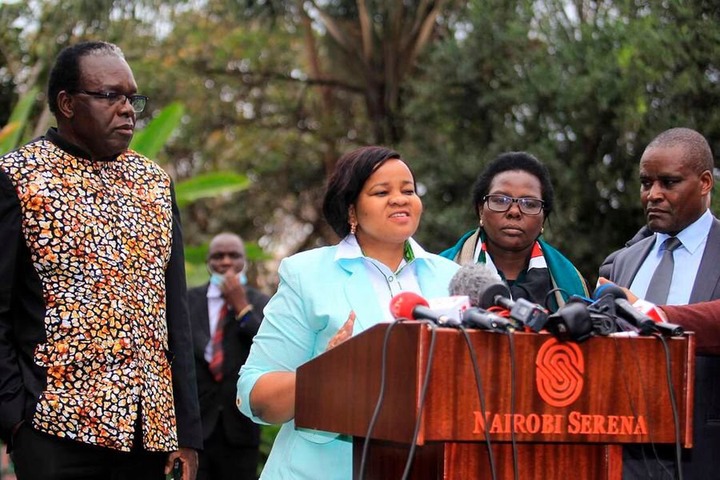 The four Independent Electoral and Boundaries Commissioners who walked away from the announcement of the presidential election outcome have spoken after terming the announcement by Chebukati Opaque.

Yesterday, The commissioners,vice chair Juliana Cherera, commissioners Francis Wanderi, Irene Masit and Justus Nyang'aya, alleged that the results were arrived at in an opaque manner, without giving further details.

According to them, having been elected constitutionally and vowed to protect the constitution, they still will not take ownership ofthe results by Chebukati because of the following

The aggregation of the percentage scored by presidential candidates were incorrect. Chebukati tabulation was incorrect as it gave an aggregate of 100.01% which translated to 142,000 votes which will make difference on the final tally. According to them, they asked for verification but Chebukati declined.

Cherera further said that the results declared did not mention the total number of votes cast or rejected votes or registered voters hence not able to tell the exact results.

On calculations of 25% of 24 counties threshold which President-elect won 39 counties and 34 of Raila Odinga, they were not able to tell which computation Chebukati used to come to the county percentage.

"Chebukati claimed that Raila attained 25% of votes in 34 counties while Ruto attained 25% in 39 counties; the question is, which figures constituted the independent variable to warrant the conclusion?" Juliana Cherara -Vice-Chair, IEBC:

In contrary to the constitution, the IEBC Vice Chair said that at the time presidency results were being announced, some results from certain constituencies had not be announced hence the reason behind them referring the results as Opaque.

Cherera further claims that towards the end of tallying of results, the IEBC Chairman denied other commissioners access to the cumulative results and refused to give them an opportunity to discuss the results.

To them, they were never given a chance to discuss discrepancies of the results from forms 34A, 34B and 34C's.