By Chebet1 (self media writer) | 1 month ago

The political boss of Ukambani, Kalonzo Musyoka, is in a precarious situation, as according to UDA politician David Tarus who has today made a statement.

Following Raila Odinga's defeat in his sixth bid for the presidency, Tarus, a contester for the Mosop parliamentary seat, asserted that the Wiper party leader was no longer qualified to represent the Ukambani region.

Kalonzo shelved his bid for the presidency three times—in 2013, 2017 and 2022—to support Raila, who was defeated in the State House race by newly-entered Deputy President William Ruto.

In order to replace Kalonzo, whom Tarus described as a spent force who has been used by Raila, the Kamba society would shortly choose either the leaving Machakos Governor and the incoming Makueni Governor Mutula Kilonzo Jnr as its de facto future leader.

"Senator Mutula Kilonzo and Dr. Alfred Mutua will soon be the subject of a " lower Eastern " poll to choose who will be the new rule in the area. After exposing the area to a torturous 15 years of opposition, Kalonzo Musyoka's capacity has been sadly pushed to its breaking limit. He has run out of steam "said Tarus in a tweet.

This follows after a rumor has elicited that Kalonzo Musyoka is yet to join Kenya Kwanza.

Prof. Edward Kisiang'ani, a political analyst, claims that the former vice president's political light has been diminished as a result of occupying Ruto's political space. 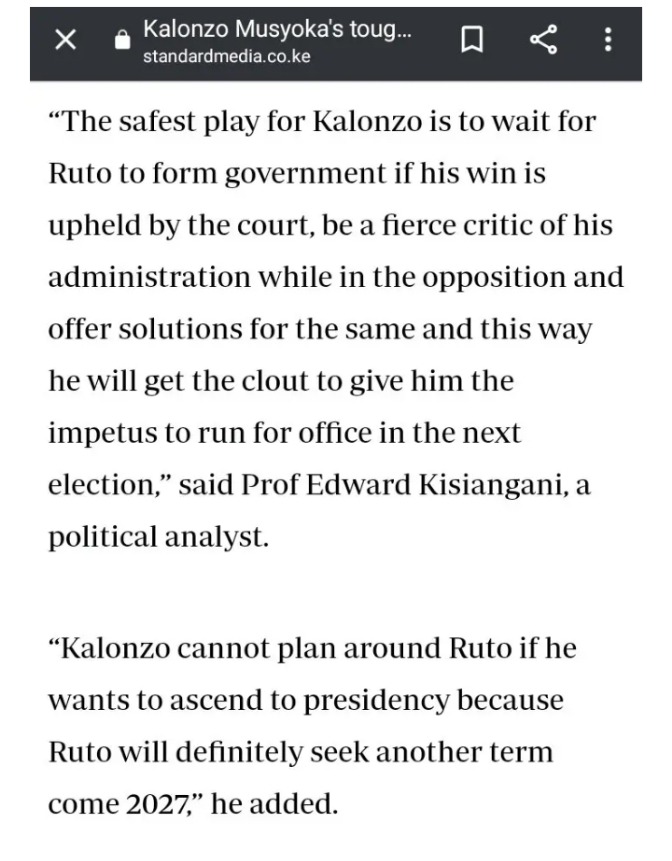 "This Man is Honourable, His Cabinet Is Credible" Mutahi Ngunyi Reacts After Naming Of Cabinet

"This Man is Honourable, Give Him The Credit" Mutahi Ngunyi Reacts to Ruto's Cabinet

Questions Raised Over The Devolution Ministry After Ruto Named His Cabinet