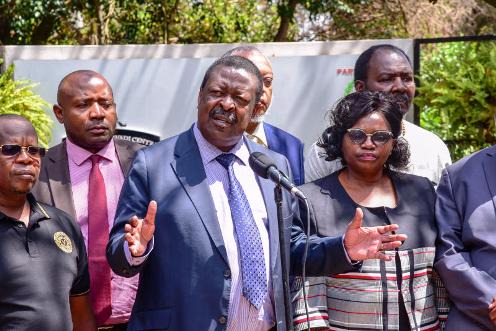 Mr. Mudavdi used a public notice dated November 30 in which he reprimanded his deputy for linking Ruto in ANC Party affairs.

He added that Savula was not the official spokesperson for the party and ought to consult on anything before speaking to the media. He urged members of the public to always ignore his sentiments.

“Certain members have erroneously assigned themselves the position of party spokesperson. Utterances by persons purporting to hold office and therefore speak for and on behalf of the party should be largely disregarded by the media. By this notice, we abrogate all utterances stated by Hon Ayub Angatia Savula in a purported capacity of deputy party leader,” Mudavadi remarked.

And in a list he read of party officials, Savula’s name was conspicuously missing; an indication that he had been fired.

The visibly angry OKA principal then added that the vacant position will be filled in their upcoming delegates conference.

“Take notice that in line with revamping our party and making it absolutely national, the impending NDC provides for an opportunity to fill the remaining slots for all other office-bearers.

“Further notice that only the party leader and the Secretary-General are the official spokespersons of the party,” Mudavadi added.

Savula’s main problem with Mudavadi started when he(Savula) claimed that Ruto was secretly involved in the ANC Party affairs by funding 3 members with sh 50,000 every week. Savula spoke this on November 27.

The MP also added that the said MPs were busy championing for a Ruto-Mudavadi alliance ahead of the 2022 polls.