By Kenyan..Blog (self media writer) | 8 months ago 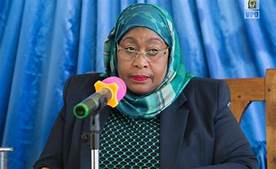 Following this move by president Samia, Tanzania's Alliance for Change & Transformation (ACT) party has congratulated both the president and the appointed vice president. Taking to Twitter, Zitto Kabwe, the ACT party leader has expressed his gratitude for the duo saying that the move is one of the great actions that show the constitution is being followed.

"My heartfelt congratulations to Dr Philip Mpango for being a Vice President-elect of The United Republic of Tanzania. Kudos to President Samia Suluhu for fulfilling constitutional duty smoothly and with tact." Zitto Kabwe posted.

The party boss further said that he is hopeful that the democracy of the United Republic of Tanzania will be restored.

"It is my hope that two of you will ensure our democracy is restored," he added.

Meanwhile, share the story with friends, and give your opinion in the comment section below. Thank you.