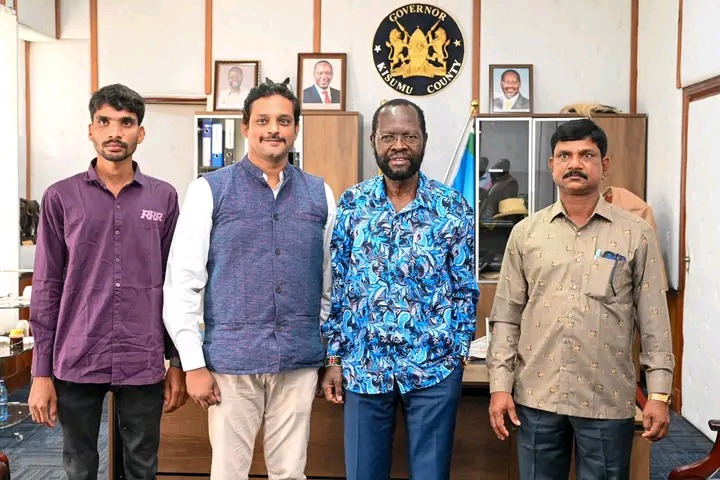 A good number of Kenyans who were keen on the photo taken by Kisumu Governor Anyang' Nyong'o alongside 3 Indian investors have noted that President Ruto's portrait missed amongst three portraits spotted in governors office.

According to report given by local TV stations, the three Indians were in Kisumu to officially launch machine that will help remove the water hyacinth that has been a problem on Lake Victoria for years.

The local news outlet says that the Indians have donated machine worth Ksh 40 Million to the County government of Kisumu, a deal that is seen over the line four years after Nyong'o visited the country.

And in on the photo they posted after having their final meeting in Governor's office, Raila's portrait could be spotted on the right hand side just on top of what looked like a cupboard.

At the middle was the retired President Uhuru Kenyatta's portrait then to the furthest left was Ayang' Nyongo's portrait. This has given birth to different views from Kenyans who hold the view that Raila's and Uhuru's portraits should never occupy public office, instead, they are asking for Ruto's portrait to be fixed since he is the Head of State.

TOP 10 Beauty Influencers That Brands Needs To Watch This 2022

What Kenyan Comedian Was Spotted Doing In Qatar [PHOTOS]