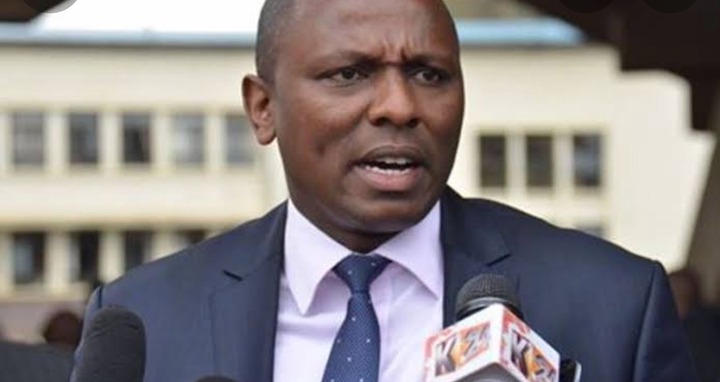 Kikuyu Mp Kimani Ichng'wa has warned Minister of lands, Her Treasury Counterpart Ukuri Yatanni and the Attorney General of Kenya Hon. Kihara Kariuki against taking alleged orders from an unnamed individual who is in power, urging that they will face the consequences themselves without their instructors.

Speaking through Twitter, the Mp advised the three to halt their transactions that they are currently undertaking secretly that targets the transfer and sealing of treaties that belong to the government, illegal awarding of land that belongs to the state and other procurement activities that are being transacted, and even being backdated so that they can hide sufficient evidence and other things sorrounding the whole shenanigans.

Ichung'wa however went ahead to claim that when the missing properties are finally discovered, the Cabinet Secretaries will be standing in court to answer their case in an individual capacity, and even being hunted down by other state agencies for long, and those who used them to do so will never come through to help deliver them from the problem. 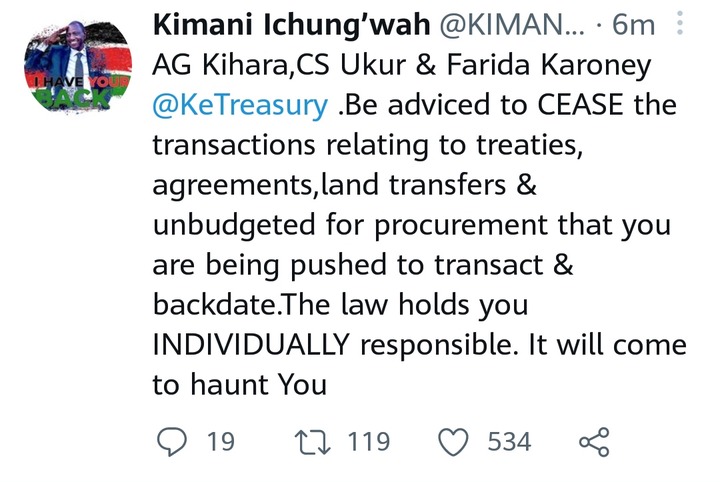 Last night, reports and allegations that was drafted in a document that was circulating on social media showed the alleged deals which were signed by unknown individuals who have been long awaiting the transactions to end before the coming of the new government. Also some clauses were not fully described, and beneficiaries were removed from the rightful place in the columns, something that left Kenyans wondering.

This comes at a time where there have been complains in the Ministry of lands for long where Several Kenyans were heading to court to demand explanation for a Purported transfer of ownership of their lands to crooked officials who claim they own them legally. Also, there have been issues sorrounding the Treasury, where UDA Mps have been lamenting of an alleged money laundering activities that were allegedly covered.

Seeing the post, Kenyans who gave their views on the same claimed that the matter should be taken seriously an even perpetrators jailed immediately since Kenyans deserve to have a better Nation to live in, while others claimed that the matter may be propaganda that is aimed at disrupting the normal thinking of Kenyans to avoid thinking about the election announcement.