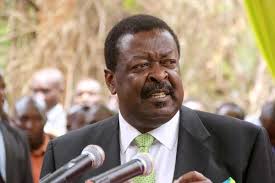 Kenya is not at a critical phase in the succesional politics. This is coming in as the country is remaining with less than a year for it to go for a general election as per the constitution. During the coming general election, the people of Kenya are expected to elect their new president who will replace the outgoing president

The One Kenya Alliance has a aim to deliver presidency come next year on August 9th 2022 and they are also keen to bring on board like minded people like the Mount Kenya Unity Forum led by Martha Karua whom they met last week.

However, On November 27th, during a function, Lugari MP and ANC Deputy Party Leader Savula claimed that DP Ruto was funding three of his colleagues with Ksh 50,000 weekly to spy on the OKA principals. He further alleged that the legislators were pushing for an alliance between the Mudavadi's ANC and Ruto's United Democratic Alliance.

Through a public notice on Tuesday, November 30, Mudavadi stated that Savula was purporting to be ANC's deputy party leader adding that the position has not been filled by the party.

The ANC leader added that the Lugari lawmaker was not mandated to speak for the party and that his sentiments should be disregarded.

The notice read "Certain members have erroneously assigned themselves the position of party spokesperson and issued statements that have since been circulated by print and electronic media outlets,"

Lugari legislator has also been thoroughly warned from making any utterance on behalf of the ANC party.

It added "Utterances by persons purporting to hold office and therefore speak for and on behalf of the party should be largely disregarded by the media. By this notice, we abrogate all utterances stated by Hon Ayub Angatia Savula in a purported capacity of deputy party leader,"

In addition, Mudavadi went ahead to list the party officials, and noticeably missing was the name of Savula who had been stating that he is Mudavadi’s deputy. He also added that the position will be filled during their upcoming delegates conference.

This emerges after the fueling rifts among the Amani National Congress allied legislators have been holding horns following the ANC-UDA corridor associations at the expense of firing strange attacks at ODM party leader Raila Odinga.