What Mudavadi and Watengula should do to deliver 70 percent of Western votes to Kenya kwanza.opinion

With only less than eighty day to the August general election, presidential candidates are now moving across the country in hunt of votes. So far, two major big wings have been formed in which one of them is expected to form the next government. 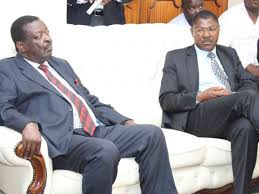 The first wing is called Kenya Kwanza Alliance which is led by the deputy president William Ruto. The alliance is made up of various political parties such as ANC, FORD Kenya, MCC among others. The other wing is called Azimio La Umoja One Kenya Alliance. The coalition is led by the former Prime Minister Raila Odinga and NARC Kenya party leader Martha Karua as the running mate.

In Kenya Kwanza Alliance, Musalia Mudavadi and Moses Wetangula have been tasked to deliver 70 percent of the Western Kenya votes so that they can be awarded the positions of Chief cabinet Minister and the speaker of the Senate respectively. In my opinion, the only way the two leaders can achieve their target is by camping in the Western region up to the election time. This is because the region is currently behind Raila Odinga's candidacy and convincing the people of the region to vote for Ruto will not be a walk in the park. Majority of elected members of parliament and MCAs are are backing Odinga for the presidential race. If Mudavadi and Wetangula Can stay in the region and engage with the residents until the election day, they mission might be successful.

That's my opinion and you can also drop your opinion on the comments section and don't forget to like, share and follow for more information. Thank you for reading my article and may God bless you all.