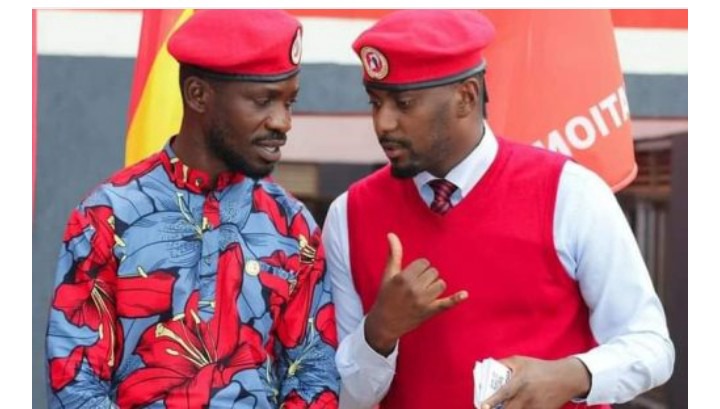 He was born in Mbarara district on January 6, 1988 to Goodman Rubongoya James, a veterinary doctor and Medius Natukunda, a teacher. His parents had four other children; two girls and two boys. Before his father passed on, Lewis went to schools in Mbarara but after his passing, he shifted to present-day Kiruhura district.

Here, Lewis went to Kanyaryeru primary school, then to Lake Mburo secondary school for O-level and finally to Nganwa high school in Bushenyi where he sat for his A-level. At Nganwa, he was a head-prefect. He then went to makerere University for a Bachelor of Laws degree.

After completing his degree at Harvard, one of the other jobs that Lewis did, was teach law at both Cavendish University and The International University of East Africa. It was at the former that he met Kyagulanyi in 2016. By then, he was known more by his stage name, Bobi Wine.

He first taught him constitutional law at Cavendish and later when Kyagulanyi changed universities, he still met him at IUEA. In 2017, when there was an opening in Kyadondo East constituency, Kyagulanyi threw his hat into the ring, where he defeated his rivals with almost 80 per cent.

Bobi Wine was becoming more politically-conscious, Lewis was one of the people he often talked to about the direction of Uganda. Lewis remembers Kyagulanyi was a very respectful student, despite his brilliance and celebrity aura.

“Here he was in my class, addressing me very respectfully. When he wanted to ask a question, he would put up his hand, and politely address me as sir. His presence in my class contributed so much to the discussion. On one hand as a young lecturer you are speaking from mostly a theoretical point of view, but here was a man who had dealt with several issues of Uganda everyday. Today he is having issues with URA and the corruption in there and tomorrow he is dealing with all other kinds of issues. From these personal experiences, he enriched the discussions in class from a practical point of view,” Lewis says.

Despite his busy schedule, Lewis says Kyagulanyi never missed classes. Eventually what started as a teacher-student relationship grew into something very big and personal. They started having more discussions outside the classroom. All these were aimed at coming up with measures that would see Uganda take another trajectory.

A year after Lewis met Kyagulanyi, something else was boiling in the country. A conversation to amend the Constitution to get rid of age limits to allow President Museveni rule beyond 75 years was gathering steam. Lewis had been a staunch supporter of President Museveni and his NRM government; why not? After all, he grew up in Museveni’s backyard in Kiruhura district.

“When you don’t go outside the world you grew up from, you are not able to see beyond that society. You will find that your perspective is limited. Growing up from Kiruhura, there was no other person spoken about but Museveni. When you are a [Kizza] Besigye agent at a polling station, you are quickly arrested and banished from the area,” Lewis says, referring to the former president of the FDC who stood against Museveni four times.

At Makerere, Lewis hosted Museveni and NRM honchos a couple of times as a students’ leader. He was very close to them, he admits. For a long time, he loved Museveni as a leader and trusted him. He read Museveni’s books, What’s Africa’s Problem and Sowing the Mustard Seed when he was in primary school.

But the chip dropped in 2017, when it became clear that Museveni was behind the move to amend the Constitution to allow him another term that would push his reign to 40 years. When he was voting for Museveni in 2016, Lewis thought it was going to be the last time he was seeing him on a ballot paper.

He thought the NRM would wriggle away from Museveni and get new leaders. Besides, President Museveni had said during an NTV interview that we would not want to be president beyond 75 years. Like many NRM former supporters, Lewis felt betrayed and cheated.

He could not imagine that the person he idolized for so long could go against his word.

“When the [age limit] debate started, it was very heartbreaking. I couldn’t believe that this man I followed and respected so much could even think about it. I must admit that I was very naïve,” Lewis says with heaviness in his voice.

With this betrayal, his conversations with Kyagulanyi intensified. He felt the urge to help Uganda undo part of the mess he had created with the years of supporting Museveni. He thought that the country needed to have a new consensus.

Initially, he had never looked at Kyagulanyi as the ideal leader to replace Museveni. But when one day he attended his music show at One Love Beach, Busabala and saw the frenzy, the love and almost cultic support of Kyagulanyi’s fans, it dawned on him that for the job at stake, it was him to accomplish it.

“I was taken by his connection with common Ugandans from different parts of Uganda. At the end of that show, I heard people calling for passengers who had come all the way from Gulu, Mbarara, Bugiri, etc.” Lewis says leaders should not be perfect, but they should have basic principles that they have to stick to no matter the circumstances

Bobi Wine story on how he met Lewis

So in 2016 I wanted to take on a new role in my life but I needed extra knowledge, so I enrolled myself into law school. As new law students, we had been briefed about our new lecturer from, fresh from the prestigious Harvard law school. That evening, a serious young man showed up in class to teach us Constitutional Law and introduced himself to us as David Lewis Rubongoya. That is how I met my favourite lecturer and that’s how Constitutional Law became my favourite course unit.

We became friends and kept discussing Uganda and it’s annoying politics and how how we are studying constitutional law in a country that has no respect for constitutionalism whatsoever.

Long story short, my teacher and I left law school to deal with Uganda’s political problems face to face and here we are. I credit you brother for a wide range of knowledge that you have shared with me and many other ghetto youths but most importantly, I salute you for leaving your comfort zone of very highly paying jobs and and prestige for the sake of our country. THANK YOU FOR TAKING THAT RISK, My prayer is that you never ever regret that decision in life.

Content created and supplied by: Russel254 (via Opera News )

Something You Didn't Know About The "Stella Wangu" Song