By PoliticalInsights (self media writer) | 3 months ago 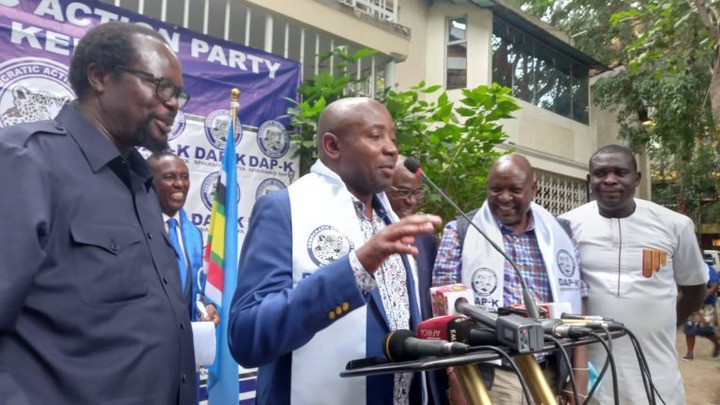 Savula made the announcement Saturday at DAP-K party headquarters, a move that materializes his pledge to support the Azimio la Umoja movement led by Orange Democratic (ODM) leader Raila Odinga.

"Today I held a meeting with the family and the people of Lugari from morning to noon and they approved my wishes," he said.

Savula said he would contest for the governorship of Kakamega on a ticket from the DAP-K party where he was also named deputy party leader.

“I will fight for the seat of governor in Kakamega under the DAP-K which is under Azimio. These facts are informed by the idea that the activities taking place in the ANC convey a formation that leans towards Vice President William Ruto,” he said at the press conference.

This was his statement at the Bukhungu II Convention in Western Kenya when he declared his support for Odinga's quest for the presidency under the Azimio La Umoja initiative.

"I moved from today to Azimio La Umoja de Raila," he said, "I now support Raila for president."

He said Mudavadi had a better chance of taking over Raila's leadership if he backed the ODM boss in this year's polls.

“It was my wish that Mudavadi and Odinga unite so that the Luyha community can be in the next government, we have suffered a lot. We have been in opposition for five years,” Savula said.

Over the next two weeks, the lawmaker said he would engage in a rigorous campaign to dampen the influence of the ANC and popularize DAP-K instead.

“Unlike Mudavadi, Savula is a decisive leader and brings a lot of strength to this new party. With us we have a striker and in this two-month transfer period we will have the best players in the game on August 9,” he said.

Wamunyinyi called Savula a valuable addition to the political party that will help root it in the western region and the country as a whole.

"We affirm our support for Azimio la Umoja and we will pursue a peaceful nation across the country," Wamunyinyi said.

UDA: Raila Plan To Make Martha Karua His Running Mate Is A Plan To Revive BBI