By Jackiejeropsing (self media writer) | 4 months ago 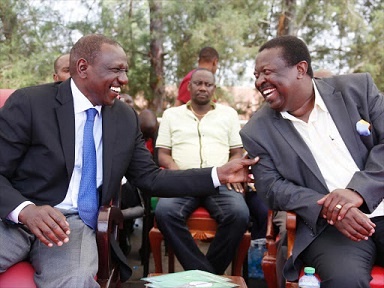 Deputy President William Ruto and his newest ally, ANC leader Musalia Mudavadi, pulled a fast one on President Uhuru Kenyatta and ODM leader Raila Odinga on Tuesday, January 25 after their allies voted to reject the reconstitution of a critical committee in Parliament.

During the first day of the sixth and final session of the 12th parliament, MPs affiliated with DP Ruto's United Democratic Alliance (UDA), Musalia Mudavadi's Amani National Congress (ANC), and Moses Wetang'ula's Ford Kenya overwhelmingly rejected the names proposed to the House Business Committee (HBC), dealing a blow to Mr Kenyatta's legislative agenda in the final days of his presidency.

The House Business Committee is a crucial organ that oversees the legislative agenda, without which the House's operations would come to a halt.

The vote came just days after a political "earthquake" on Sunday, when Ruto and Mudavadi announced a political alliance in Kenya's Bomas.

Speaker of the National Assembly, Justin Muturi, said the House was paralyzed by the election results.

"As things stand, the House is unable to conduct business. My options are limited," said Speaker Muturi who adjourned the House's afternoon session, saying, "It is now up to the majority and minority leadership of the House to see what they will do."

Following Sunday's political re-alignments, the impasse set the tone for what is expected to be a tumultuous final session of the 12th parliament, with less than seven months until elections. 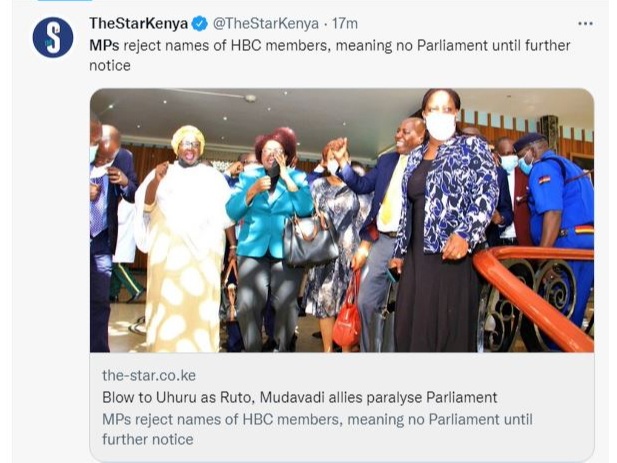 Because of the impasse, the country risks not having a budget for the fiscal year 2022/23, which would allow it to pay salaries to government employees such as civil servants, police officers, and military personnel, finance elections, purchase medical drugs, and honor debt obligations and pensions for retiring government employees.

This is because Parliament will be unable to convene without the HBC because there will be no business to be transacted.

The Ruto-Mudavadi MPs, on the other hand, were unmoved by the expected consequences of their actions.

"Their actions were pre-planned, but they failed to consider the consequences. Let them all go to the people and tell them that because of what they did this afternoon, the government will be unable to meet its obligations," Mr Sharif said.

Amos Kimunya (Kipipiri), the majority leader, had earlier moved a motion for the House to approve the HBC members list, which was seconded by Kathiani MP Robert Mbui.

The opposition MPs urged the speaker to put the matter to a vote, which they did, surprising the government.

It was a routine procedural motion that isn't usually contested. 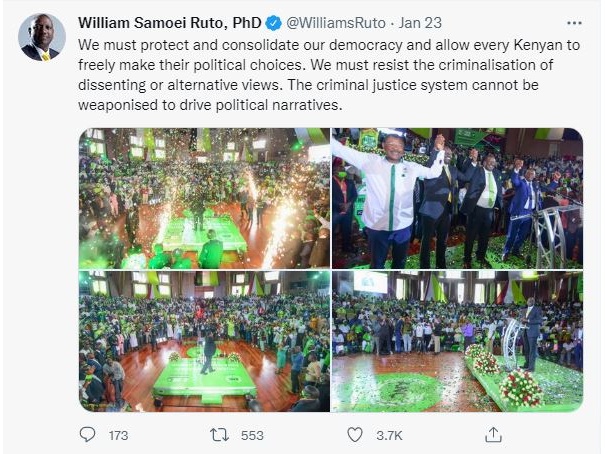 This means that the House majority and minority leadership will confer to change some names on the list so that the reintroduced motion does not have the same substance as the one that was rejected.

The House rule also mandates the appointment of seven additional members to the Committee.

The Legislature was set to debate and approve the Budget and Appropriations Committee's (BAC) report on the 2021 Budget Policy Statement (BPS).

The BPS, which lAlsoays out the government's annual spending plan, shows that Sh3.31 trillion will be spent in the fiscal year 2022/23.

The BPS estimates that the national government will spend Sh2.07 trillion of the projected Sh3.31 trillion budget. 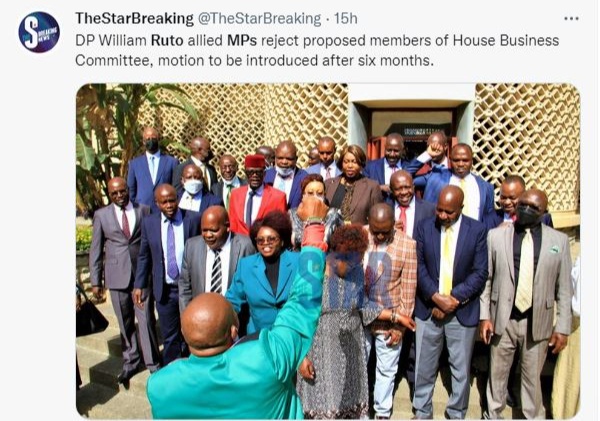 The National Assembly's Standing Orders state that the House's first order of business at the start of each session is to reconstitute the HBC through a motion.

The House rises to sit the next day after the motion has been passed, and the new HBC members, led by the Speaker, retreat to prepare the House's business for the week.

Because the HBC names were rejected, the motion can only be reintroduced after six months, which means sometime in July this year, just days before the General Election, and with no budget.

The same Standing Order, on the other hand, allows for a response to the country's looming crisis.

With the Speaker's permission, a motion to rescind the decision on such a question may be moved under part two of Standing Order 49.

This means that any member can propose a rescission motion, but the Speaker must approve it.

The rescission motion, on the other hand, should not be the same as the one that was moved and defeated.

The House Standing Order states, "No Motion shall be moved which is identical in substance to any question which has been resolved either in the affirmative or in the negative during the preceding six months in the same session."

This isn't the first time the House has been thrust into unfamiliar territory. After the motion to reconstitute the HBC was rejected, the House was faced with a similar situation when Mr Francis Ole Kaparo was the Speaker. 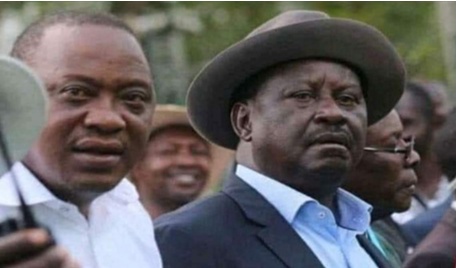 However, the late Prof Saitoti, then the House leader for government business and the automatic chair of HBC under the old constitution, moved quickly to avert a possible crisis by bringing a rescission motion to the Speaker, which was approved and adopted.

After a divisive 2007 general election, there was a similar situation during Kenneth Marende's tenure as Speaker, which centered around who should lead government business in the House between Mr Odinga and then ODM-Kenya leader, now Wiper, Kalonzo Musyoka.

The situation was resolved after Mr Marende took on the role of government business leader in order to reduce political tensions. After a truce was reached between the two opposing sides, he would hand over the position to Mr Musyoka.