List Of Raila Orphans And What They Plan To Do As Ruto Administration Settles Down.

A number of political bigwigs who supported the former prime minister Raila Odinga's failed bid for presidency have taken political backseats as they contemplate on what to do while others are now into business.

Some of them put their careers on the line to market the Azimio la umoja coalition party leader across the country.

Others didn't contest at all hoping that they would get nominations in the azimio government that never was.

Political analyst professor Masibo who teaches at Moi university says that some of these politicians put all their hopes in their coalitions without thinking that things may go either way.

"When you are supporting someone, you get blinded to the extent that you think that you are winning come rain come sunshine", said professor Masibo.

The former governor told daily nation that although he isn't an elected leader, he will still remain in the public space.

"I will continue adding value in different places. I will remain active in the public space, though I am back to the private business", said muriithi.

On his part, the immediate former kakamega governor Wycliffe oparanya who is also the deputy party leader ODM said he too will be into business although he signaled that be will be on the ballot for presidency in 2027.

"I am back to my businesses because we have been doing business alongside politics", said oparanya.

However others like ODM chairman John Mbadi who sacrificed their ambitions of vying for Homabay gubernatorial seat was rewarded with a nomination.

Others are former Kitui governor charity Ngilu who withdrew from gubernatorial race to concentrate on the national campaigns and Jeremia kioni who lost to UDA in Ndaragwa constituency.

Others however have ditched azimio and joined president William Ruto's Kenya kwanza team.

Which advise can you give politicians? Feel free to share your thoughts and comments on this on our comments platform. 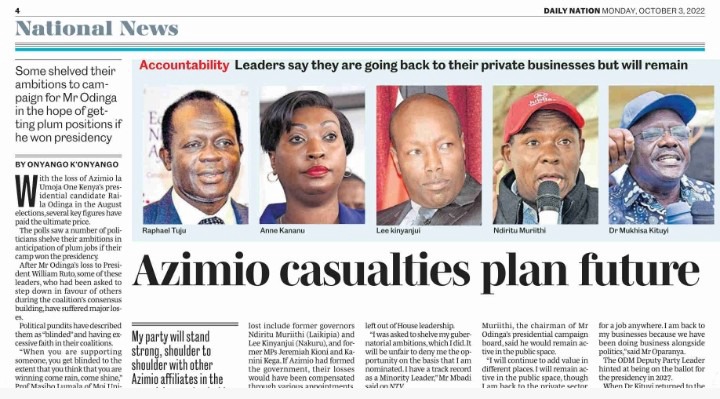